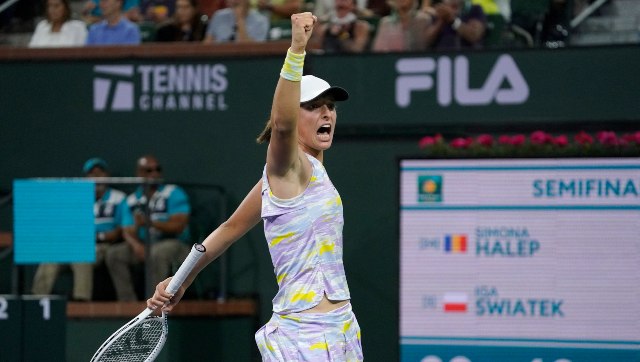 Former French Open champion Iga Swiatek beat Maria Sakkari 6-4, 6-1 on Sunday to win the WTA Indian Wells title and move to a career-high ranking of number two in the world.

Swiatek’s fifth career title was her second in as many tournaments after her triumph in Doha last month, and pushed her WTA match win-streak to 11.

It also ensured the 20-year-old from Poland, who shot to prominence with her victory at Roland Garros in 2020, will climb two spots to supplant Barbora Krejcikova at number two in the rankings behind Australian Ashleigh Barty on Monday.

“I’m really overwhelmed and honestly my mind is blown,” Swiatek said, explaining that coming into the tournament she didn’t think it was “realistic” to think she could maintain the level that saw her win Doha for a second straight tournament.

“I wouldn’t think of myself as someone who’s ready to play two tournaments in a row and win it,” she said.

However, now that she’s followed Agnieszka Radwanska as the only Polish players to reach number two in the world, she’s aiming even higher.

“I feel like getting the number one is closer and closer,” she said.

Greece’s Sakkari, who came into the tournament ranked sixth in the world and also had a chance to get to number two with a victory, will rise to a career-high third.

Both players struggled to find a rhythm on another breezy day in the California desert, where their first set featured six breaks of serve in what Swiatek called “crazy” conditions.

“For sure you could see that we are, at the beginning, a little bit stressed, and the wind is also not helping,” Swiatek said.

“But I’m pretty glad that I played better and better every game, and I managed to somehow find little bit of balance even in these conditions.

“It was pretty hard to actually play the tactics that I wanted because of the conditions. But I wanted just to stay consistent and really solid because that’s the most important thing when the ball is going, you know, in weird directions.”

Trailing 5-4 in the first, Sakkari led 40-30 but sent two backhands into the net to give Swiatek a set point, which the Greek saved with forehand winner.

Sakkari came up with a service winner to save another set point, then double faulted to give Swiatek a third chance, the Pole taking the set when Sakkari stroked a backhand into the net.

With a set in hand, Swiatek dominated in the second. Although she couldn’t convert two break points in the second game as Sakkari made it 1-1, Swiatek roared through the next six games to close it out in 80 minutes and remain unbeaten in five career WTA finals.

But she said she leaves the tournament with increased confidence.

“I really believe I took a step forward this week, even though I lost today,” she said.

“I’m disappointed. I’m not going to hide that. I’m very disappointed I did not win today. But there are a lot of positive things that I’ll take with me.”

That includes joining Stefanos Tsitsipas as the only Greek players to be ranked third in world.

“When I think about it, I can’t believe there’s only two girls above me right now,” she said. “I’m very proud that myself and Stefanos have actually grown tennis in Greece. Having two players in that ranking position is something huge for us.”