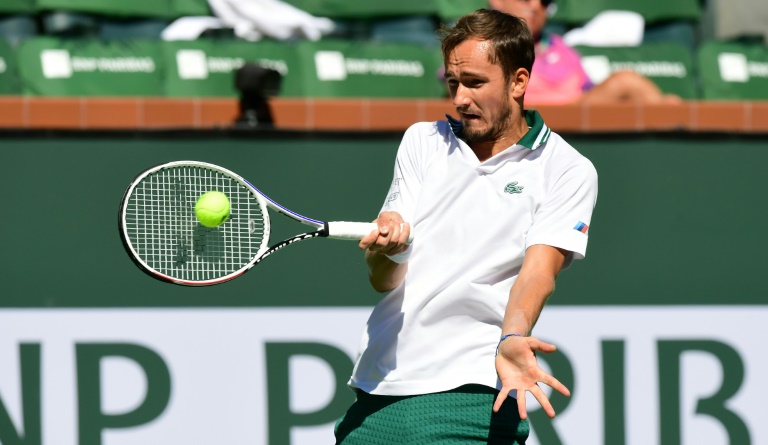 Indian Wells, California: Reigning US Open champion Daniil Medvedev joined the growing list of top-seed casualties at the ATP/WTA Indian Wells on Wednesday, losing in the fourth round to world No. 28 Grigor Dimitrov 4-6, 6-4, 6-3.

Medvedev, who won his first Grand Slam title last month at Flushing Meadows, had not lost a set heading into the fourth round but dropped eight straight games, and had his serve broken six times against Dimitrov, en route to a stunning early exit for the top seed.

“That shows how slow this court is and the conditions, more like clay, which I don’t like. To lose four times the serve is just unacceptable. That’s why I lost the (second) set.”

World No. 2 Medvedev did not take a break after his emotional US Open victory and said his busy schedule may have finally caught up with him.

“I did feel exhausted in this tournament. Now I can say it. I couldn’t say it before my matches. There are a few physical things that have come up,” said Medvedev, who is hoping to eventually overtake world No. 1 Novak Djokovic.

Medvedev won the first set, was up 4-1 in the second and appeared to be cruising to another easy victory when the wheels came off: his unforced errors mounted and service game fell flat.

Medvedev had no answers for the way Dimitrov was playing and predicted the Bulgarian would likely go on to capture the title.

“If he plays like this, like the way he played me from 4-1, then he is going to win the tournament,” Medvedev said.

“He played the second half of the match better than anyone did against me at the US Open. It is not like I gave him the match.”

The match turned in the sixth game of the second set as Dimitrov broke Medvedev’s serve for the second time in the set to cut the Russian’s lead to 4-2.

Dimitrov held serve in the next game and then broke Medvedev’s serve twice more to take the set and lay the foundation for a dominating performance in the third.

The Bulgarian closed out the match on the first match point, when Medvedev blasted a forehand long.

“Been watching quite a bit of his matches,” Dimitrov said of Medvedev. “I really wanted to play this match to be completely honest. What he has been able to accomplish this past year and a half is pretty amazing. I think it really pushes me also to do better.”

Dimitrov will face Polish eighth seed Hubert Hurkacz, who rolled over Russian Aslan Karatsev 6-1, 6-3 on Wednesday in the quarter-finals.

The 25-year-old Medvedev beat Djokovic in the US Open final last month to prevent the Serbian star from becoming the first man since the legendary Rod Laver in the 1960s to win all four Grand Slams in the same year.

On Wednesday, Medvedev made six double faults in the two hour, 15 minute match in the main stadium.

Medvedev, who has won 50 matches in 2021, described this as a minor setback because this event is not a Grand Slam.

“I don’t see this as the end of the world. I don’t think this would happen in a Grand Slam,” he said.

This is the second time Dimitrov has beaten Medvedev in five career meetings. The last time was a three-set win in their first encounter in 2017 in London.

In the women’s draw, two-time winner Victoria Azarenka punched her ticket to the semi-finals with a straight-sets win — 6-4, 6-2 — over Jessica Pegula.

Azarenka, who is the only player left in the women’s and men’s fields to have won in Indian Wells, captured the title in 2012 and 2016.

The 32-year-old from Belarus needed 94 minutes to end the run of American Pegula and reach the final four of this event for the fourth time in her career.

“I really played well in the crucial moments,” Azarenka said. “I felt like I stepped up to the occasion a lot. That’s what I’m really happy with today.”

Azarenka will next face Jelena Ostapenko for a spot in the women’s final.