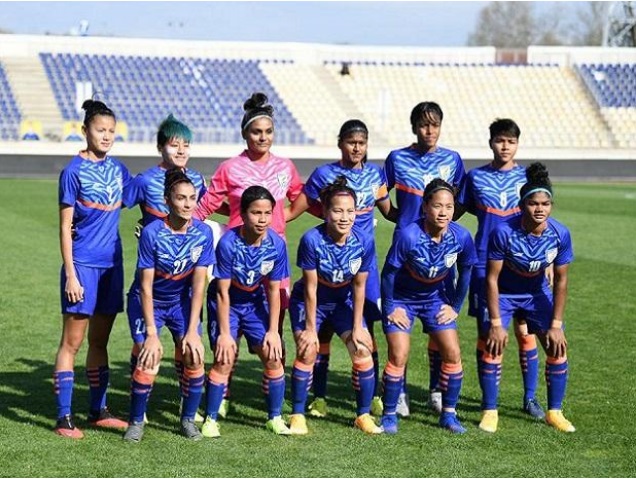 The Indian women’s football team suffered a 1-2 defeat at the hands of Belarus in its second international friendly here on Thursday.

While both the sides played out even first half, Belarus took the lead through a Shuppo Nastassia penalty in the 66th minute, before Pilipenka Hanna doubled their lead with a 78-minute strike.

India’s Sangita Basfore pulled one back deep into added time.

After a good performance against Uzbekistan, India started off with a high tempo in the first half and almost took the lead within three minutes, when Soumya Guguloth’s shot from outside the box struck the Belarus cross-bar.

Striker Pyari Xaxa did manage to get her head onto the rebound, but her effort looped over the goal and went out of play.

Anju Tamang, playing at the right fullback position, often made forays into the opposition area. Not only did she help in the attack, but Anju also tracked back to make a few crucial blocks and affect a few turnovers in possession.

Around the quarter-hour mark, Manisha dribbled past a couple of defenders and made her way into the opposition area, before going down after being pressed by the Belarus defenders. However, the referee waved play on.

Minutes later, Belarus had a great opportunity to score when midfielder Pilipenka Hanna was played through on goal. She slipped her shot past the keeper, but India’s defender Ranjana Chanu recovered well in time to clear the danger.

India head coach Maymol Rocky gave a run-in to experienced defender Ashalata Devi towards the end of the first half, bringing off Soumya in her place, as the two sides headed into the dressing rooms level on the scoreboard.

Belarus grabbed the initiative after the changeover as they managed to work the ball into the Indian net, but the referee soon blew his whistle, signaling that one of their attackers was in an offside position during the buildup.

However, India soon started to settle into the second half as well. A minute past the hour mark, Manisha Kalyan soared up the left flank to enter the opposition area and send in a low cross.

However, it evaded striker Pyari Xaxa, who tried in vain to get a vital touch on the ball.

Minutes later, though, Belarus was awarded a penalty after one of their attackers was adjudged to have been fouled inside the Indian box.

Shippo Nastassia slotted the ball to the left of Aditi Chauhan, who had dived in the correct direction, but the ball was beyond her reach.

Belarus doubled their advantage 10 minutes later when Pilipenka Hanna was played through into the Indian penalty box, and she squeezed her shot between the keeper and the near post as the ball hit the upright and bundled in.

India looked determined to get back in the game after that, and Indumathi instantly found Manisha on the left with a piercing through ball. The latter pulled the trigger after sprinting into the Belarus box, but her effort was saved.

With around five minutes of regulation time left on the clock, India won a free-kick close to the Belarus area. Sangita Basfore stood over the dead ball and put her laces through it, but her effort sailed inches wide.

Before got one back late in added time as she pulled the trigger from around 30 yards out.

The Belarus keeper managed to get a glove onto that, but Sangita’s shot packed too much of a punch, as the ball deflected off the keeper’s gloves and into the net.