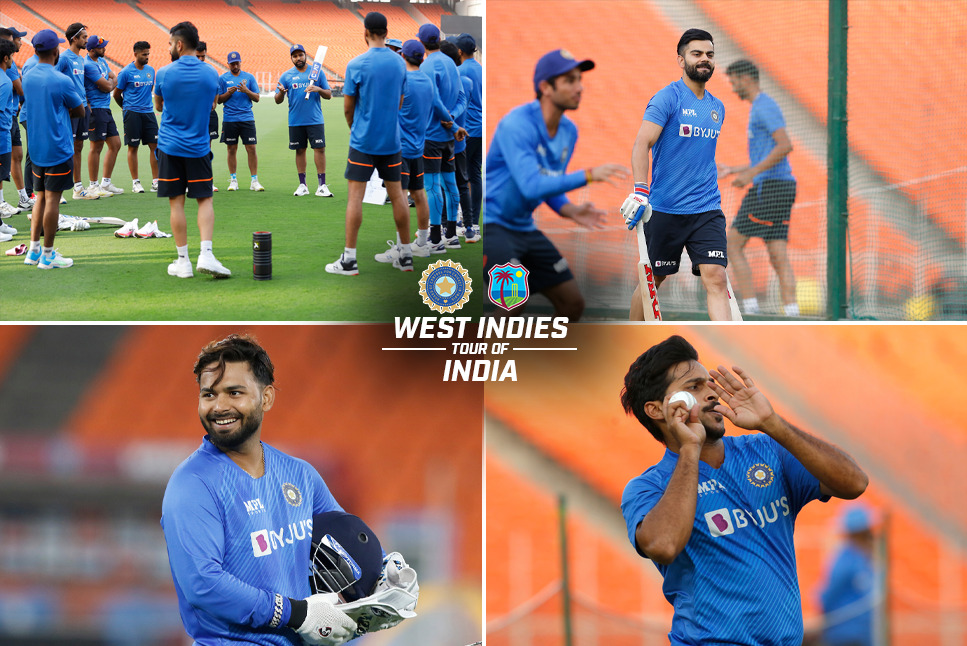 Ahmedabad: The Indian team on Friday carried out their first extensive training session ahead of the three-match ODI series against the visiting West Indies.

On Thursday, the team had a light session where the players had been accompanied by trainers. The likes of Virat Kohli, Rishabh Pant and others batted at the nets while the spin duo of Kuldeep Yadav, who is making a comeback to the ODI team, and Yuzvendra Chahal rolled their arms overs. Twitter @BCCI

On Friday however, barring the trio of Shikhar Dhawan, Ruturaj Gaikwad and Shreyas Iyer, all the players and support staff were present for training after testing negative for COVID-19.

The players practiced under lights and it was a full-fledged session.

It is understood that head coach Rahul Dravid introduced young leg-spinner Ravi Bishnoi to the players.

The likes of Virat Kohli, Rishabh Pant and others batted at the nets while the spin duo of Kuldeep Yadav, who is making a comeback to the ODI team, and Yuzvendra Chahal rolled their arms overs.

Opener Mayank Agarwal is in isolation for three days and will be an option for the opening game if KL Rahul isn’t available.

Wicketkeeper-batter Ishan Kishan, who can also open the innings, was also added to the ODI squad.

A COVID-19 outbreak had hit the Indian cricket team on Wednesday as three players— senior opener Dhawan, reserve opener Gaikwad and middle-order batter Shreyas—had tested positive for the virus during their mandatory isolation period before the start of the series.

Four more cricketers, including net bowler Navdeep Saini, had also tested positive for COVID-19. Saini is on the stand-by list.

The Indian team assembled in Ahmedabad on 31 January for the three ODIs against the West Indies.

The series starts in Ahmedabad on Sunday with India’s 1000th ODI match but it is now a foregone conclusion that Dhawan, Ruturaj and Shreyas will be missing the rubber as they will have to undergo a week-long isolation and then return with two negative RT-PCR tests.