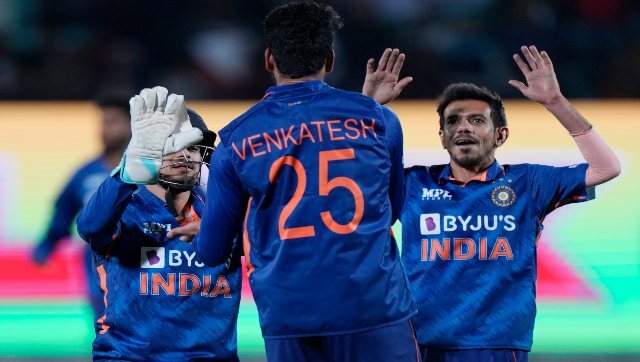 Dharamsala: The in-form Shreyas Iyer continued to impress with his dazzling strokeplay as his unbeaten 44-ball 74 powered India to a series-clinching seven-wicket victory over Sri Lanka in the second T20 International on a chilly Saturday evening in Dharamsala.

Ravindra Jadeja blasted 45 off 18 balls as India chased down the target of 184 with 17 deliveries to register their 11th straight win in the format. Sanju Samson contributed 39 off 25 balls.

India were dealt a massive blow early on as they lost their captain Rohit Sharma for one in the final ball of the first over, the successful bowler being Dushmantha Chameera. Rohit was out bowled after Chameera delivered a short-of-a-good length ball that was angling back into the right-hander.

It was the ideal start for the visitors who enjoyed the cushion of defending a big total. They were rejoicing soon as Ishan Kishan (16) got out to Lahiru Kumara, the soft dismissal meaning India were reduced to 44 for two in the sixth over.

At the same time, the early departure of the openers provided a perfect opportunity for the likes of Iyer to make a big score, and he did make it count by playing a fine knock that was laced with four sixes and six fours. Shreyas Iyer and Ravindra Jadeja celebrate after their unbroken fourth-wicket stand helped India chased down the 184-run target with 17 balls to spare. Sportzpics

The talented Samson, too, made use of the chance but got out after making a brisk 39 off 25 balls while adding 84 vital runs for the third wicket with Iyer, a partnership that not only steadied India’s innings but also brought them right back into the contest.
Samson struck three sixes and two fours during his entertaining stay in the middle. Jadeja then smashed seven fours and a six.

Earlier, skipper Dasun Shanaka blazed away to an unbeaten 47 off a mere 19 balls after opener Pathum Nissanka top-scored with a 53-ball 75 as Sri Lanka set the hosts a stiff target.

Having got himself in after his opening partner Danushka Gunathilaka (38 off 29 balls) laid the foundation, Nissanka cut loose and struck his runs at over 140. He found the fence 11 times until Bhuvneshwar Kumar got him on the final ball of the penultimate over.

However, Sri Lanka wouldn’t have got to what they eventually managed had it not been for Shanaka’s five massive sixes and two fours.

India’s new ball operators, Bhuvneshwar and Jasprit Bumrah got the white ball to swing in the first few overs, beat the bat and hit the pads with the latter losing one review after a huge shout for an lbw in the second over.

The Sri Lankan openers got their acts together as the innings progressed with Gunathilaka, especially taking on the Indian bowling attack.

Gunathilaka’s, as well as Sri Lanka’s, first authoritative shot of the match came when he played Bumrah though the covers in the third over.

The attacking left-handed opener pulled Harshal Patel for his second boundary, even as the Indians managed to keep things fairly quiet in the middle.

Nissanka welcomed Yuzvendra Chahal with a boundary, rocking back to cut the leg-spinner’s loosener through the cover point region, but the visitors were still not able to get the run rate they were looking for.

However, from a poor 32 for no loss after the six powerplay overs, Sri Lanka got a move-on with Gunathilaka clobbering Jadeja for 18 runs in an eventful ninth over, which also saw the dismissal of the man in form.

The first ball was full outside off and Gunathilaka went down the wicket to smoke it over deep midwicket for the evening’s first six.

A length ball outside off was played over the cover-point fielder for a four and having forced Jadeja to come around the stumps after the left-arm spinner had started from over the wicket, Gunathilaka got his second maximum when he smashed one over the deep midwicket boundary.

But Jadeja had the last laugh when, trying to go for one too many, Gunathilaka played one high up in the air towards long-on and Venkatesh Iyer managed to hold on to the skier after seeming to have misjudged it at the picturesque, floodlit Himachal Pradesh Cricket Association Stadium where a sizeable (50 per cent full) crowd was making plenty of noises.

Using his resources well, skipper Rohit got another breakthrough, Charith Asalanka (2), who was trapped in front of the wicket by Chahal.

Kamil Mishara (1) too got out cheaply, falling to Bumrah’s slow off-cutter.

But Nissanka found an able ally in Shanaka, adding 58 quick runs for the fifth wicket to prop up their team.