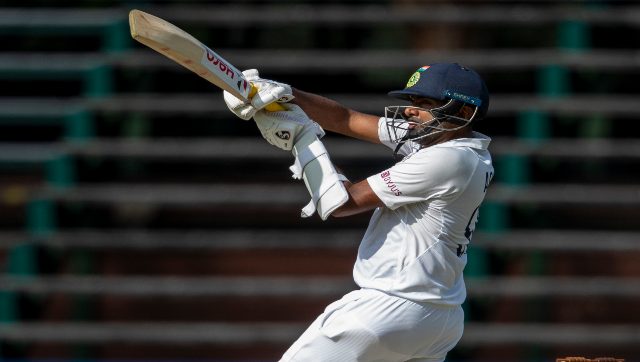 One of the great head-to-heads in Test cricket played out around this time 11 years back, at Newlands in Cape Town. On day three of the final game of a three-match series, Dale Steyn and Sachin Tendulkar locked horns in a memorable battle — the South African paceman at the peak of his powers, the Indian veteran none the worse despite slipping into his 22nd year in international cricket. In a contest for the ages, there was little to separate the virtuoso duo.

Steyn finished with five for 75, Tendulkar gritted his way to a seven-and-three-quarter-hour 146 – the 51st and last Test hundred of his 200-match career. There was no winner on points, not even by the narrowest of margins. Virat Kohli scored a gritty 201-ball 79 with technical adjustments to his batting. AFP

A similarly riveting face-off ensued at the same venue on Tuesday, the opening day of the decider in the latest showdown between the two rivals. The protagonists this time answered to the name of Virat Kohli, the returning Indian captain, and Kagiso Rabada, the excellent Protean quick in his 50th Test. Qualitatively, it hardly paled in comparison with the Tendulkar-Steyn skirmish; once again, this was a contest that ended dead even. Kohli ground out 79 of the most significant runs of his celebrated journey, Rabada’s four for 73 was chiefly responsible for India being bowled out for 223.

Tuesday will be rightly hailed as Rabada’s day out. Having sleepwalked through the first three innings of the series, the strapping paceman was given ‘a rocket’ – his skipper Dean Elgar’s words – midway through India’s second innings in the previous Test at the Wanderers. He responded in style, firing out Ajinkya Rahane, Cheteshwar Pujara and Rishabh Pant in no time to turn the game on its head. In many ways, this four-wicket haul was an extension of the fire and brimstone he had unleashed in Johannesburg.

Kohli had watched that high-quality exhibition of searing pace and immense skill from the confines of the dressing room, having missed the game with an upper back spasm. That was the latest in a series of misadventures stretching beyond two years now. Since the beginning of 2020, his form has nosedived, his authority at the batting crease diminished, his standing as the finest all-format batsman of his generation questioned.

If he was feeling the pinch, Kohli offered no indication, insisting he was ‘at peace’ with himself.

“I don’t look at myself from the lens the outside world looks at me,” he said on the eve of the final Test. “I’m at peace with what I’ve been able to do for the team when there’s a tricky situation.”

You couldn’t blame the outside world for looking at Kohli from the lens it chose to. In 2021, Kohli’s returns were modest – 536 runs in 11 Tests at 28.21, just four fifties in 19 innings. He didn’t bat badly or grasp at lines from a scratchy, fading memory. But not once did he deliver on the promise of a big one, with a moment of madness invariably undoing the good work of hours of hard labour.

His greatest failing was the ebbing of discipline in shot selection. During the five-year period of peak success between 2015 and 2019, one of the standout features of Kohli’s batting was his decision-making. There was a supreme understanding of his game, of the conditions, of the situation and of the threats that existed in opposition bowling attacks. As the returns began to dwindle from the beginning of 2020, anxiety seemed to attack and embrace him in a vice-like grip, its tentacles digging deep and persistent.

Consequently, he often reached out to wide deliveries so easily best ignored. The gremlins in the mind were compounded by a pronounced, generous back-and-across shuffle that took his right foot to the off-stump and the left foot well outside. Unsurprisingly, balls wide to the rest of the world were well worth pursuing for Kohli. He momentarily won inner battles but was soon sucked into flirting outside off and putting the men behind the stumps in business.

One of the notable changes to his batting on Tuesday was where his left foot finished as he set himself up in his stance. Contrary to the recent past, it was pointed dead straight down the track on the line of the off-stump, meaning his awareness of where the off-stump lay and therefore which balls to play at and which to leave was exemplary. That manifested itself in extraordinarily consistent ball-ignoring. Kohli steadfastly refused to look at deliveries as close as half a stump-width away, trusting the bounce and his wide repertoire as he bedded down to play the patience game.

With the body sorting itself out, the mental peace he had alluded to the day before manifested itself beautifully. Kohli refused to look at the scoreboard, refused to be swayed by the meagre returns early on for time spent in the middle. He didn’t get off the mark until his 16th delivery, his monk-like unflappability as South Africa’s pacers doled out the occasional sucker ball left everyone in awed admiration. By the time he reached his fifty, he had negotiated 158 deliveries; only once had he got to that mini-milestone slower. When he was dismissed off his 201st ball, he had flowed to 79, his highest score in 26 months and as many Test innings.

That, at this stage of his career and in the middle of a series, Kohli has the desire and the ability to successfully make technical adjustments is testimony to his endeavour to keep becoming a better version of himself. The spanking off-drives, of which there were many when the ball was full enough and close enough for him to venture into that stroke, meant this wasn’t as much of an exercise in self-denial as Tendulkar’s 241 not out against Australia in Sydney had been in 2004. But this could have a far greater impact on Kohli and the Indian batting in the longer terms, and therein lies the excitement.