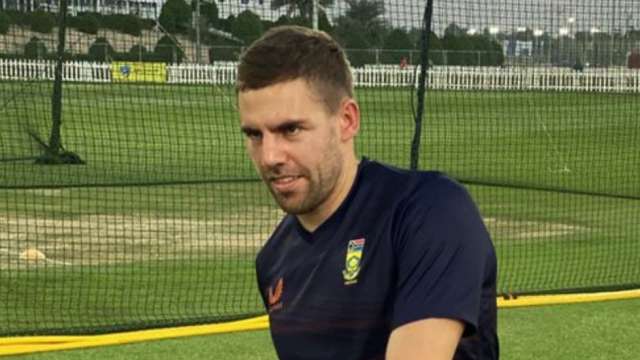 Johannesburg: South Africa pacer Anrich Nortje was on Tuesday ruled out of the upcoming three Test series against India due to a “persistent” injury.

Cricket South Africa (CSA) did not specify the nature of injury and also did not name a replacement for Nortje who has taken 47 wickets in 12 Tests, including three five-wicket hauls.

The first Test is slated to begin in Centurion from 26 December. The exact nature of Anrich Nortje’s injury that has ruled him out of the India Tests is yet to be revealed by Cricket South Africa. AFP

“Proteas bowler, Anrich Nortje, has been ruled out of the three-match, Betway Test series against India, due to a persistent injury,” CSA said in a statement.

“He has unfortunately not recovered adequately for the expected Test match bowling loads and is currently consulting with specialists to manage and advise on his recovery. No replacement will be brought in,” it added.

Nortje is well known for his exploits in the Indian Premier League (IPL) where he plays for Delhi Capitals.

The Capitals have retained Nortje and not compatriot Kagiso Rabada ahead of the IPL mega auction next month. Rabada will be leading the pace attack in the Boxing Day Test.

Nortje has also played 12 ODIs and 16 T20s for South Africa.