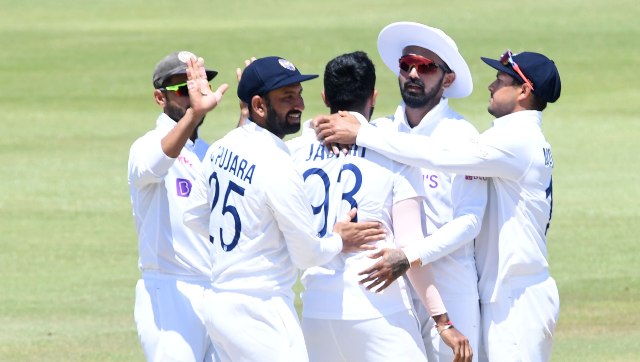 Centurion: India’s once-in-a-generation pace unit destroyed a listless South Africa with its relentless attack to fashion an emphatic 113-run win in the first Test on Thursday, setting the team on the path towards an elusive series victory in the Rainbow nation.

The 2021 started with India breaching the Fortress Gabba Down Under and it couldn’t have been a better end as they have now brought down Supersport Park which has been a Proteas’ citadel for the longest time. The target of 305 on a track with a lot of uneven bounce was always out of question for a South African unit that is low on quality and the script unfolded as per the narrative set.

Such was the command of Indian pacers that they even took rain out of equation despite one full day being lost.

It was pity to see South Africa, that boasted of some great names of the yore, couldn’t even post 200 runs in both the innings with skipper Dean Elgar’s 77 off 156 balls not exactly being a saving grace.

Quinton de Kock will be missing from the line-up from the next Test as he will be on paternity leave and it will certainly make it easier for India to claim their first series win in South Africa since they first toured here in 1992.

For India, the four pacers took 18 wickets between them and Ravichandran Ashwin wrapped up the South African tail just after the lunch session to complete the formality.

The three men who won the match for India were, vice-captain KL Rahul for that first innings hundred that gave the team platform, supremely talented Mohammed Shami (5/44 and 3/63) who had a match-haul of eight wickets and peerless Jasprit Bumrah.

Bumrah is perhaps Indian cricket’s biggest gift, a freaky fast bowler, who can provide moments of magic as he did on the fourth evening to close the match for India.

Mohammed Siraj and Shardul Thakur were the perfect supporting cast in one of the better and comfortable overseas wins for Virat Kohli’s men.

Bumrah (3/50) set the tone for the final morning by removing the dogged Proteas skipper Elgar (77 off 156 balls) while Siraj (2/47) and Shami also got into the act knowing that there is forecast for some rain in the late afternoon session.

Having gauged the variable bounce of the track, skipper Elgar knew that survival isn’t an option and he needed to counterattack right at the onset.

With the stodgy Bavuma for company, 36 runs were added in the first 45 minutes but the best part was that there was no let-up in the intensity of the Indian attack as skipper Kohli and wicketkeeper Rishabh Pant were constantly heard cheering the bowlers on.

Shami dropped Elgar off his own bowling but it was Bumrah, who kept on asking probing questions to the Proteas skipper.

One such delivery was angled into the left-hander as he shuffled way too much and leg before was one of the easiest of decisions that umpire Adrian Holdstock had to make in this match.

Hoping against hope, Elgar appealed for DRS but he already knew that he was gone for good.

Quinton de Kock (21) came in and hit a couple of delicious shots off Bumrah, trying to knock off as many runs possible off the target.

The hardworking Siraj bowled one with the scrambled seam and just like the first innings, De Kock tried to cut with very little room for execution with the ball coming into him and ended up chopping onto his own stumps.

Wiaan Mulder (1), who has had a forgettable match with no wickets to show for his efforts, got a delivery from Shami that was way above his skill-set.

The ball pitched on length while landing on seam. Mulder shaped for one that would come back but it straightened enough to kiss the outside edge off his bat into Rishabh Pant’s gloves.