India vs New Zealand: Pressure mounts on Ajinkya Rahane even as team management continues to back him 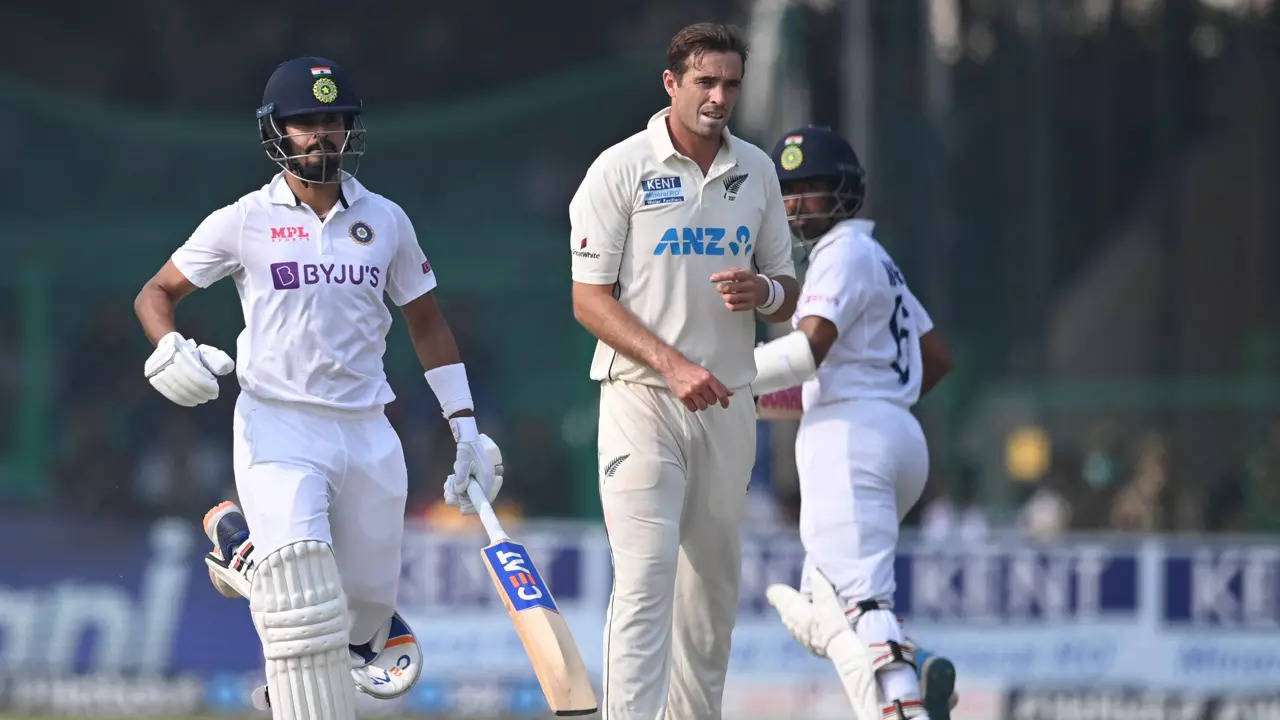 Ajinkya Rahane, the stand-in Test captain, is nine wickets away from claiming his fifth win when in charge and maintaining his unbeaten record as skipper. Ajinkya Rahane, the India Test batter, could be counting his days in the playing XI.

If this all sounds familiar, it’s because we’ve been here before. The pressure on Rahane to justify his place with match-winning totals has been growing all year. In the past, Kohli dropped Rahane during the South Africa series in 2017/18, when his average was 44.15, after one poor series and four matches after he made a hundred. Sportzpics

Now, scores of 35 and 4 in the first Test against New Zealand in Kanpur have carried to a crescendo the rising chorus of #RahaneOut. With Virat Kohli set to return for the Mumbai Test, and other competitors for a middle-order berth in fine form, Rahane looks far from a certain pick for the next match.

Going further back in time, among all batters who have at least 500 runs since the start of 2020, he has the worst average. A career average that flirted with 50 in 2016 after his first 30 matches has dipped to 39.30 after his 79th in Kanpur.

His team-mate Cheteshwar Pujara gets as little sympathy, given his average of 22.62 this year and no hundreds since January 2019. However, Pujara has perhaps escaped the harshest of the clamour for his ouster because of the recent show of “intent” that the team management asked of him, and the value of his own obdurate style.

In the demanding grind of Indian cricket with its prolific bench, numbers like theirs can quickly translate to a ‘Thank you for your service, but the exit is that way’. But that this discussion is still open is because of the long rope both Rahane and Pujara have enjoyed from the selectors and the team management.

“Of course, you want the top order to contribute,” batting coach Vikram Rathour said after day four of the Test, when India were at one point 51/5 before a lower-order resistance took them to a position of strength. “[But Rahane and Pujara] have played 80 (79) and 90 (91) Tests matches, so they have the experience.

It echoed what Rathour had said a few months ago, in England: “I don’t think we have arrived to that point that it” – Rahane’s poor form – “should become a concern.”

And it followed the brave face the regular vice-captain himself put on ahead of the Test, insisting, “I am not concerned about my form, I just think about contributing for the team. It is not always [about] scoring a hundred.”

“I am very sure he is just one innings away,” Pujara too had backed his team-mate. And perhaps getting tautological, had added: “Once he gets a big score, once he gets a big hundred, he will be back in form.”

To be fair, Rahane has had a few of those “important knocks” or “just one innings” in the recent past. Those include a second-innings 61 at Lord’s, which set up the win for India, and a hundred at the MCG last year, which was a rousing response to the horror of 36 all out in the first Test. That remains the last Test hundred scored by any of Virat Kohli, Pujara or Rahane, so he isn’t alone in lacking runs. But those knocks have flattered to deceive, with the periods between the “one innings to get back into rhythm” markedly fallow.

In Kanpur, Rathour suggested that Rahane remains in the side because of his past efforts. While it is perhaps commendable that the management backs the players publicly, irrespective of the work that goes in behind the scenes to address any inadequacies, this explanation is particularly hard to reconcile with previous selection decisions.

In the past, Kohli dropped Rahane during the South Africa series in 2017/18, when his average was 44.15, after one poor series and four matches after he made a hundred. India recently left their best spin bowler on the bench, irrespective of his form, when the conditions called for it. They have, time and again, showed an inclination to make tough calls – even if they are against the popular opinion – simply keeping the present in mind.

“I don’t think we can put a number on that,” Rathour said when asked about how many more chances someone like Rahane would get. “It depends on the situation the team is in and what the team requires.”

The situation the team is in right now is that they have a captain who is coming back to take his place, a youngster who has made a hundred and a fifty on debut and who shouldn’t have to make way, several others waiting in the wings, and a stand-in captain who is searching for runs. What the team requires right now is, quite simply, runs from a top order that doesn’t make the tail do the heavy lifting.

Being dropped for the Mumbai Test need not be the end of his career for Rahane, but a reset. However, if his poor form continues, even that one special innings and any goodwill he may have may not be enough to check out of the last chance saloon.

On This Day in 2014: Phillip Hughes Tragically Dies After Being Hit by Bouncer
England cricket director pleads for ‘second chances’ in racism scandal