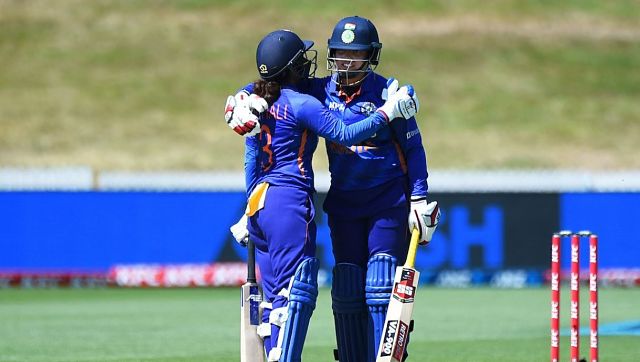 After an excellent outing in the 2020 T20 World Cup, India had gone 364 days without international cricket. When they played again, they lost to both the ODIs and T20Is against South Africa at home.

South Africa led the ODIs 2-1 going into the fourth ODI. India piled up 266/4. Never in their history had they lost while defending a score this big. But with no Jhulan Goswami to provide the early breakthrough, the South African batters feasted. Their top four all got fifties, and they romped to an easy win. But Goswami was there in Mackay, where Australia needed 41 in four overs. These were bowled by Deepti Sharma, Poonam Yadav, Rajeshwari Gayakwad, and Goswami. Aided by a controversial no-ball, Australia won.

Fast forward to India’s current tour of New Zealand. In the second ODI, India kept the target to 14 in two overs. They had taken seven wickets, but the 49th over, bowled by Harmanpreet Kaur, sealed their fate.

They were placed slightly better in the third ODI, having to defend 18 in the last two. This time Goswami conceded 12 in the 49th over before Lauren Down lofted Sharma for six.

India could have won each of the last three matches. Had they done that, they would have won the series in Australia, and would have been 2-1 up in the current series.

While there is little doubt that India’s bowling at the death was below par in these matches, that is only part of the cause. A team, after all, has to bowl fifty overs, and death overs are a small fraction of that. India have conceded runs throughout the innings, which has let some outstanding batting performances down.

Statistic 1: India have crossed 265 only seven times against Australia, New Zealand, and England, the three strongest sides in Women’s ODIs (two more against South Africa). Three of them came in the 2017 World Cup. The other four, in their last five ODIs, twice in each of Mackay and Queenstown.

Statistic 2: Only 14 times in history has a side – any side – chased more than 265 to win a match. Four of them have been against India Women, between March 2021 and now.

Of course, these do not necessarily establish that the Indian batting has improved and bowling has deteriorated over years. One may argue that teams are chasing big targets against India only because India are getting the runs.

However, since 2021, of the five major teams, only Australia have scored at a quicker rate than India, but only New Zealand have conceded more runs, which indicates how India have done in the two departments. And when one compares the two numbers, India’s balance sheet is in the negative.

India’s recent success with the bat is unprecedented in their history. Part of that can be attributed to the influx of new talent over this period. Mithali Raj (strike rate 69 since 2021) is still their leading scorer over this period, but the selectors have made up their mind about not having another similar batter. They dropped Punam Raut despite having an excellent series against South Africa, for like Raj, she struck at 69 as well.

Instead, they placed faith in uncapped talents like Shafali Verma, Richa Ghosh (both of whom had played T20Is before), Yastika Bhatia, and – in the absence of Smriti Mandhana – S. Meghana. All of them made their ODI debuts in this period. Not all of them had great starts, but the selectors backed them.

Not so much for bowlers. Of the above, one can ignore Renuka Singh, who debuted in the third ODI against New Zealand. But generally, the selectors have virtually backed no new bowler barring Meghna Singh over this period.

Most Indian bowlers of the current team have had illustrious careers. Unfortunately, while they had been able to contain power-packed batting line-ups of the past, things have changed over the past two years. While trying out things, bringing in young talent has worked for batters, the selectors seem to be reluctant to do the same for bowling. With the World Cup two matches away, they are unlikely to, either.

And that is likely to pose a problem.