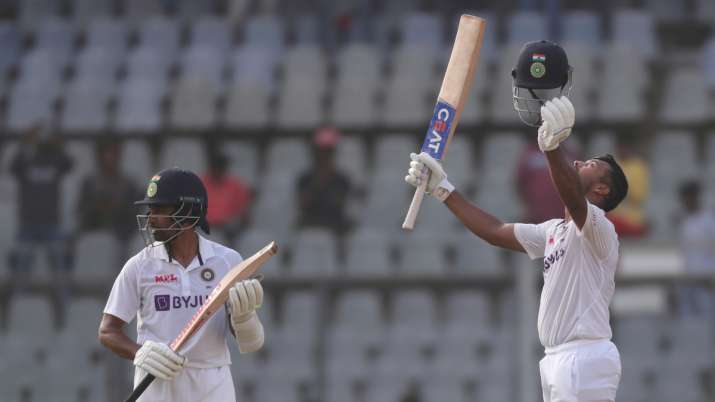 Mumbai: Under pressure to prove his worth, Mayank Agarwal made the best statement possible with a superb hundred as India recovered from a sudden top-order collapse to reach 221 for 4 in two extended opening day sessions against New Zealand in the second Test here on Friday.

Agarwal (120 batting, 246 balls), who is all but certain to sit out once Rohit Sharma and KL Rahul come back during the next series (if South Africa then away, if West Indies then home), added to a happy headache for coach Rahul Dravid, on a day when vice-captain Ajinkya Rahane had to be “dropped” because of a hamstring niggle. Mayank Agarwal plays a shot during Day 1 of the second Test between India and New Zealand held at the Wankhede Stadium in Mumbai on Friday. Sportzpics

Worse, Cheteshwar Pujara and Virat Kohli failed to trouble the scorers and it was a hundred that came under pressure with India being 80 for 3 and 160 for 4 at different stages of the game.

Had the Indian team management been forced to play Rahane, the axe was likely to fall on Agarwal and it’s never a great feeling to go out there in such a situation.

He was jittery to begin with as a streaky boundary through slips came early on but once he marched down the track to loft Ajaz Patel (29-10-73-4) for a straight six, his nerves had all but vanished.

The boundaries — 14 in all and four sixes, all off Patel showed his class as he got his fourth hundred in Tests.

In fact, Patel, who was by far the best New Zealand bowler in view, having reduced India from 80 for no loss to 80 for three, did look pedestrian in front of Agarwal at times.

When an airborne Agarwal punched the air after a square driven boundary off part-time seamer Daryl Mitchell, one could sense that pressure weighing a thousand tonne must have come off his chest.

Agarwal was the first choice opener during the England series but before the first game, he got hit on the head and KL Rahul coming in his place, grabbed the opportunity with both hands.

With Rohit also having his best overseas series as Test opener, Agarwal was confined to the reserves.

He could again be back in the reserves but he made a statement of intent with his strokeplay as he dominated the 80-run fourth wicket stand with Shreyas Iyer (18).

Along with another reserve player in Wriddhiman Saha (25 batting, 53 balls), Agarwal added another 61 runs before the close of play.

New Zealand had erred in not playing Neil Wagner on a track where there was a lot of bounce on offer.

If Agarwal showed discretion, same couldn’t be said about Shubman Gill (44, 71 balls), who was dazzling till he was around in their 80-run opening stand before Patel snuffed him out.

Gill looked fluent before paying for his impetuosity which led to a mini collapse.

Mumbai-born left-arm spinner Patel also picked up Cheteshwar Pujara and Virat Kohli in quick succession with both failing to trouble the scorers.

Patel became the second Mumbai-born cricketer after legendary England captain Douglas Jardine to play against India in his city of birth.

He altered the length cleverly and the extra bounce, which is always a speciality of Wankhede, helped him immensely.

He had Gill on the mat when he flighted one to entice him to come out and the ball tuned and jumped with keeper Tom Blundell making a hash of a stumping.

However, the very next ball saw him shorten the length as Gill tried jabbing at it and it turned enough to take the outside edge into Ross Taylor’s palms.

Pujara’s confidence has hit nadir after too many failures and he survived a DRS appeal from New Zealand before he jumped down the track to york himself. Patel, very wisely, fired one with an angle straight into his toes and what happened with Pujara often happens with out-of-form batters.

For skipper Kohli, it was a delivery that straightened after pitching as the Indian skipper tried to play a forward defensive stroke. Straight umpire Anil Chaudhary gave him out and Kohli immediately asked for a review.

The replay was inconclusive on whether it hit the bat first or pad and as per rule, TV umpire Virender Sharma went with his on-field colleague, leaving Kohli absolutely livid.

He had a word with leg umpire Nitin Menon and was seen expressing his displeasure.

The TV cameras then caught him standing in the dressing room balcony, visibly upset with the decision, which was a touch and go one.