India vs New Zealand: Hosts’ spin attack combine plans, patience and a lot of Axar Patel to turn the screws on Kiwis 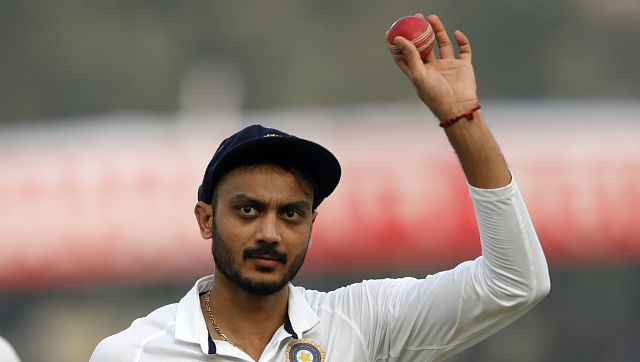 In the face of resolute New Zealand batting and a Kanpur pitch that offered limited turn on the third morning of the first Test, R Ashwin dipped into his bag of tricks.

The off-spinner went around the wicket, and over the wicket; he kept close to the stumps, or he angled the ball in; he tested the left-handers by bowling wide of the off-stump, then targetted their stumps with the slower balls. He got edges and he rapped the pad. Planning, experimenting, stubborn in his persistence for wickets. Axar Patel celebrates the wicket of Tim Southee on Day three of the first Test against New Zealand in Kanpur. Sportzpics

At one point, for instance, against Kane Williamson, Ashwin went around the wicket and released the ball close to the stumps. Then, on his follow through, he went across the pitch to the left, without stepping on the danger area. Something different to make something happen, at the risk of earning the umpire’s ire for blocking his view and impeding the non-striker.

Later in the afternoon, in the face of the first chinks in the New Zealand batting, as the surface stayed slow and lower, Axar Patel went for the opposite line of attack: he kept it simple.

Channelling the accuracy that has given him a “dream start” to his career, the left-arm spinner hit good lengths. Again and again. He dried up the runs and built up the pressure. Until something happened.

Ross Taylor, still new on the crease, was set up by Axar bowling ball after ball on a good length angling into him. Then, using the crease well like Ashwin, Axar released one slightly wider than the others, only for it to take Taylor’s edge as substitute wicketkeeper KS Bharat completed a good catch.

In these two men, India had two spinners whose approach and skillset were varied. But Ashwin and Axar, with Ravindra Jadeja for company, showed again how the different approaches in the Indian spin attack are wonderfully complemented by a commitment to patience, as well as strong bowling plans and the ability to execute them well.

And they don’t even need the pitch to do all the work for them.

On this ‘moving day’ of the Kanpur Test, it was Axar, the third and newest member of the trio that walked back to applause with the match ball in hand. Axar finished day three of this first Test against New Zealand with a remarkable 5/62, including six maiden overs. Ashwin had three wickets and Jadeja one, as the spinners shared nine scalps on a day when New Zealand went from 197/1 to 296 all out. And this on a surface where only the odd ball took serious turn.

Also striking was the spin trio’s economy, which added to the pressure and prompted the wickets. All the spinners went for less than two runs an over.

In his post-match media duties, Axar explained that the team’s bowling plans for the day were centred around staying patient, even as the New Zealand opening pair added 151. “It’s not like you’ll get a wicket in every ball.”

Instead, he explained, he aimed to use the crease to good effect. Just as Ashwin too did, adding to the doubt in the batters’ minds.

“I was trying to use the crease more, today,” Axar said. “Because when I was bowling with a round-arm action, from wide of the crease, it was making things happen. I got some turn and got something to happen.”

That something resulted in his fifth five-for in just four Tests. It was, he agreed, “like a dream within a dream start”.

If Taylor fell prey to the wide release point after Axar was handed the second new ball, Henry Nicholls was done in by the simpler plan of targetting the off stump to be trapped in front. Tom Latham, nearing his century, came down the wicket and was beaten in the air by one that was pitched very wide, to be stumped. Tom Blundell was bowled by one that kept low, but which again was full on the off stump, before the angle from wide of the crease had Tim Southee bowled too.

In his first three Tests against England, Axar’s straighter delivery and the speed with which he bowled proved most potent on turning pitches. Here, it was his accuracy and plans that shone.

The patience that Axar credited for the wickets is a virtue that holds him in good stead in his red-ball career too. Despite his heroics – 32 wickets in four Tests with an innings still to go – Axar remains the team’s third spin bowler and that is unlikely to change. And he is at peace with that.

“I am just enjoying myself,” he said. “When I go onto the ground, I’m not thinking that Ashwin and Jadeja are there, so mine isn’t the lead role. When I have the ball in hand, I just bowl as per the pitch and my plans and what the team needs.”

The Indian bowling attack will be looking to close out the game when New Zealand return to bat in the fourth innings. According to Axar, the pitch is only getting slower. The odd ball is turning, and a few more are keeping low. The spin attack’s planning and patience will be tested again.