India vs New Zealand: Hosts’ 3-0 win a fitting scoreline for a team that was led well, handled pressure better 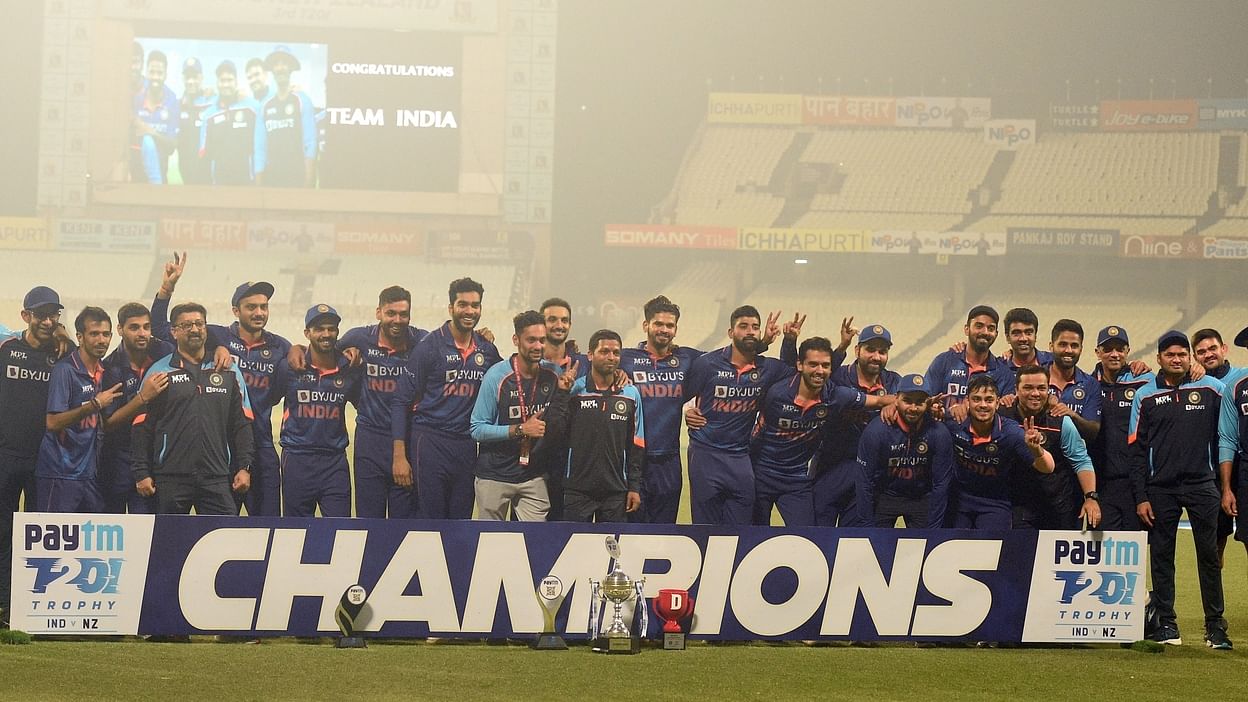 It’s an interesting thing about cricket that a scorecard can be one-sided when a match was close, and it can look close when a match was actually one-sided. New Zealand were destroyed on the scorecard in all but one match, and 3-0 was a fair reflection of the way that the series went, but there were parts of the games where New Zealand played as well, if not better than India.

There were two clear stars with the bat in this series: Martin Guptill and Rohit Sharma. Both scored over 150 runs in the 3 matches with a strike rate over 150. Openers have only done that 6 times before this series, so for both lead batters to do it in the same series was quite remarkable. The big difference between India and New Zealand was what happened in the final overs of each innings. AP Photo

With the new ball (other than in the final match) the battle was fairly even. New Zealand had some good partnerships, and so did India. During the middle overs, Ish Sodhi and Mitchell Santner generally kept things tight for New Zealand, while Ravichandran Ashwin and Axar Patel did the same for India.

The big difference between the two sides, however, was what happened in the final overs of each innings.

New Zealand completely imploded under a combination of excellent bowling (especially from Harshal Patel and Ashwin) and poorly thought-out option taking. With a lineup featuring Glenn Phillips, Jimmy Neesham, Tim Seifert and Mitchell Santner, New Zealand should have had enough firepower to dominate the death overs. Instead, they were more like a water pistol than a machine gun.

Some of that was new players to the crease struggling to adapt to the conditions and the bowling. Some of it was the high quality bowling (and in particular high quality bowling from two bowlers who New Zealand’s analyst had probably not made good plans for) but a lot of it was down to poor execution of their skills.

India on the other hand took their opportunities magnificently. Whenever New Zealand started to get on top, a player found a way to reverse the pressure. In the first match, Ashwin took two wickets in 4 balls to turn the match on its head after a big partnership between Guptill and Mark Chapman.

In the second match, New Zealand went from 125/3 to 140/6 in the space of 3 excellent overs, with each of Ashwin, Harshal and Bhuvneshwar Kumar picking up wickets and keeping things tight. In the final match, India looked like they had blown an opportunity of a good score at 140/6. Then Harshal and Deepak Chahar destroyed the New Zealand bowlers at the death to post a total

In each of the matches, New Zealand’s final score was less than what the statistical models suggest that they would get, based on their 15th over score. While the models are not perfect, they do well to tell the story of this series. In the three matches, New Zealand finished a collective 41 runs behind where they should have reached. That was not the only difference between the sides, but it did account for a lot of it.

Another point of difference was the quality of captaincy. Rohit used his resources well, while New Zealand had competent bowlers who did not bowl and instead got to watch their teammates get hit to all parts. James Neesham was given one over in the series. It was when India needed 11 runs to win off 18 balls – much too late to make a difference. Daryl Mitchell was also given one over – he was asked to defend 10 off the last over (and he almost managed it). None of Mark Chapman, Glenn Phillips or Rachin Ravindra were given a single over.

For India, however, when Venkatesh Iyer was given an over, it was over No 7, when Guptill was going full steam ahead. Giving him the ball early had a number of advantages. It allowed Rohit a chance to see if he was likely to be successful on that pitch. New Zealand never got to see if the pitch might have suited some of the part-timers. It meant that if Iyer went badly, there was still time to make up for it, and by bowling him early it meant that Rohit could shuffle around his other bowlers later on to make sure that he had the best matchups.

By not giving the part-timers a bowl early enough first Tim Southee and then Santner denied themselves that flexibility. That is perhaps a weakness of having a bowler as a captain rather than a batter. They sometimes underestimate the value of a part-timer.

New Zealand do not have much positive to take away from this series. The players who succeeded were players who were expected to succeed, and some of the players who had a chance to step up failed to do so.

For India, however, the series is much better news. They have uncovered a potential star in Harshal, both with the bat and the ball. He showed an ability to swing and cut the ball, as well as a good range of slower balls (including one that seemed to have absolutely no change of arm or hand action whatsoever.)

India were better in the death overs, they were better led and take much more out of the series than New Zealand. It was a perfect start to the new leadership combination of Rohit and Rahul Dravid. Some series score lines don’t tell the full story, but on this occasion, 3-0 explained exactly how dominant India were.