India vs New Zealand: Dream to play at Wankhede and achieve historic feat, says Ajaz Patel in an interview with R Ashwin 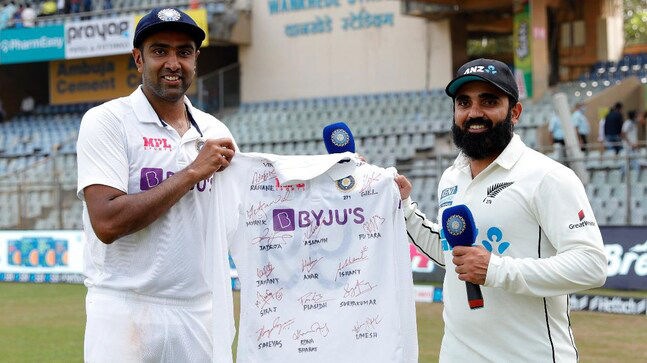 Mumbai: New Zealand left-arm spinner Ajaz Patel considers himself “fortunate” to be just the third Test cricketer ever with 10 wickets in an innings as all he tried doing in that magical performance against India was putting the ball in the right areas for a long period of time.

The 33-year-old Mumbai-born Patel, who migrated to New Zealand as a seven-year-old, said it has been a “dream come true” to be able to play at the city of his birth and come up with a historic feat.

“It has been a special outing for me. It’s a dream to come here and play at Wankhede and be able to do something like that (historic feat) is very special. Not only for me but also for my family back home,” Patel said in an interview by senior India off-spinner Ravichandran Ashwin.

“I will count myself as fortunate. I thank God to have (got) this opportunity but it was about putting the ball at good areas for a long period of time,” he said in a video uploaded by the BCCI.

“As a spinner, sometimes you really have to work. I have to bowl 47 overs or something. In the end I am very exhausted, 72 or 73 overs in three days.”

India won the series 1-0 with a 372-run thumping of the visitors in the second Test here, the same match in which Patel made history.

He also admitted that he was put under a lot of pressure by the Indian batters.

“It is about playing that long games especially when the wickets suited you and giving something to you. We knew that you guys are amazing players of spin. You guys put a lot of pressure on me.

“I was trying to be on the money every ball because as soon as I miss, you guys would be on top. So, it has been a bit of a mind game. It was about sticking and trusting what you are doing is the right thing.”

Ashwin, on his part, lauded Patel and presented to him, a jersey signed by Indian players as a mark of respect to the Kiwi bowler.

“A middle class Indian family, parents migrated to New Zealand. His father started a workshop. It is an amazing journey (for Patel),” Ashwin said.

“He (Patel) was a fast bowler, I don’t think you would fancy to be one here.”

Patel said he is content with his choice of switching to spin bowling after initially wanting to be a pace bowler.

“In New Zealand, I definitely wanted to be a seamer first up, even now sometimes I wish to bowl seam. But I don’t really have the height of a fast bowler and so I made a great choice switching to spin bowling about two years ago.

“It has been a lot of hard work but I am very grateful to be where I am right now in cricket,” said Patel who took 14 wickets in the second Test.

He said Ashwin was one of the players he looked up to because of his excellent command on the craft.

“As you know, it takes a lot of time to develop the craft. It has been amazing watching your journey and the amount of wickets you have taken in different conditions around the world.

“For me, it was just about trying to emulate some of the best and you are definitely out there.”

Talking about his memories in India, he said, “Early on in India, it was just like playing cricket in Maidan just because you enjoy playing with the rubber ball or heavy tennis ball, way to go.

“But in New Zealand, probably it is more structured. In our family, Indians are cricket mad and we still play in the backyard every hour, crazy times, just cricket mad family really.”