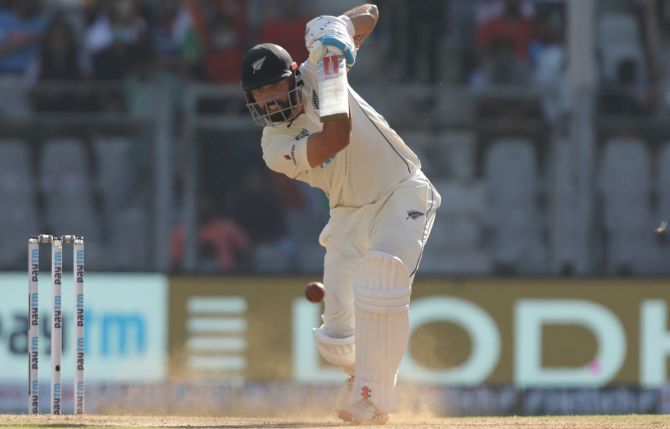 Mitchell (60 off 92 balls) shared 73 runs for the fourth wicket with Henry Nicholls (36 batting) to provide much needed resistance in New Zealand’s improbable chase of 540. New Zealand’s Daryl Mitchell plays a shot during the third day of the second Test match between India and New Zealand at the Wankhede Stadium in Mumbai on Sunday. AFP

“Set the template from Mayank’s batting, the way he put pressure on our spinners,” Mitchell said after the day’s play.

“Disappointing to not still be out there and kick on, but nice to get a partnership going.”

Mitchell admitted that his team is obviously in a tough situation in the Test.

“They (Indian bowlers) are constantly throwing things at you and you’re trying to counter that. You have to keep trying to win the small battles.

“Tough situation we’re in, but it was just about trying to go out and do what we can. Obviously it is very challenging.”

Talking about the Wankhede pitch, he said, “It’s a pretty challenging surface, there’s definitely balls turning there with your name on it.

“It’s just about trying to put pressure back on the bowlers. That’s the beauty of Test cricket.”

Pakistan vs West Indies: Kieron Pollard withdraws from tour after failing to recover from hamstring injury
India vs New Zealand: No ‘designer’ touch to India’s unparalleled dominance in their own backyard