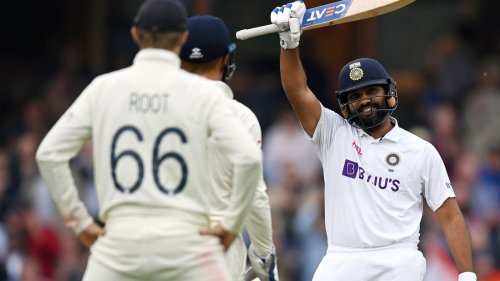 India opener Rohit Sharma notched up his maiden Test century at The Oval on Day 3 of the fourth Test against hosts England.

The ‘Hitman’ appeared extremely patient in his knock but once again backed his instinct, getting to the milestone in style, with a massive six over long on off Moeen Ali.

He is currently unbeaten on 103 off 218 deliveries, with 12 fours and a six in knock. His partner, Cheteshwar Pujara (48), meanwhile, looks positive and is inching closer to his half century. As far as the match situation is concerned, India are 199/1 at tea, with a lead of 100 runs.

Twitterati were in awe of the Hitman after he completed a century to remember. Here are a few reactions:

Indian cricket has waited and waited… and then waited some more… for THIS Rohit Sharma.

Test centurion outside India… that too as an opener… Finally… and what a shot to bring it up with!!#EngvInd #IndvsEng

What a knock. What a transformation. What a player! #ENGvIND pic.twitter.com/uSZCx9qH1h

Ireland vs Zimbabwe, 5th T20I – Live Cricket Score
Taliban and Afghanistan flags side by side at ‘unity’ cricket match in Kabul