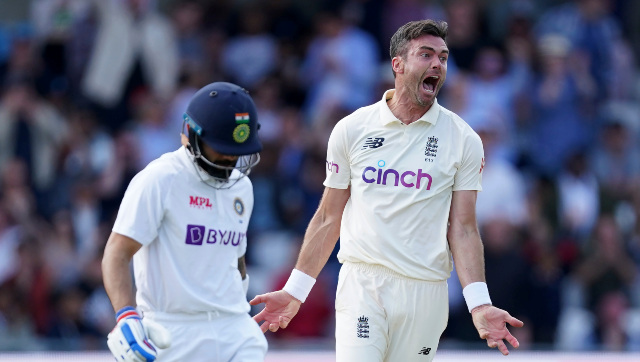 The sight of James Anderson posing with a defensive shot as his stumps are uprooted behind is a moment to remember in Indian cricket. In the background, Jasprit Bumrah is jumping in delight. He had his share of battles with Jimmy in the match the heat had added a lot to the context of that win. For an England supporter, it would not have been a great sight.

It appeared England would go only downhill from there. Many changes occured in the squad for the second Test but only time would tell if they were for good or bad.

However, things changed quickly on the first morning of Headingley Test with India getting bundled out of for 78, with Anderson leading the charge, tricking Indians with skills – outswing, inswing, wobbly seam and what not! It was assumed that England will be more vocal on the ground after seeing how much heat was produced in the Test before. But instead, Joe Root’s side was a calmer unit. They hed learned that in order to beat India, they should avoid having any mini battles with them.

“I think the Lord’s Test match was a very heated Test match. It was a very close Test match all the way. In sports, you don’t want to give an inch and when you have two countries for whom cricket means a lot, you do have heated exchanges. So, it was a great game to watch.”

The former England captain also felt that after Lord’s defeat, the need was to stay calm rather than engage in another one-on-one spat with members of the Indian team.

“Lord’s was a difficult defeat. What we did after that is calm the emotions down. Refocus on what we can do,” Collingwood told select Indian journalists on Tuesday.

The England think-tank decided to make some chopping and changing. And to good luck, the move worked.

Collingwood said, “Obviously we brought Dawid and Haseeb into the side. It was just really refocussing on the job in hand and settle in in new conditions at Headingley. And make sure that we go about our business nice and calm. I think the performance at Headlingley was incredible considering what had happened at Lord’s.”

Collingwood feels what really set the tone for England in the match was India crumbling down for just 78 in the first innings but what gave them the confidence was the first-wicket partnership between two new set of openers – Haseeb Hameed and Rory Burns.

“Obviously we got off to a great start. We fought well. That start got us ahead of the game very early on. Our first-wicket stand was outstanding in terms of the series. That partnership calmed everyone down. We played wonderfully for the rest of the innings,” said Collingwood. At the Oval, England await another challenge as R Ashwin is expected to finally break into the India XI. Collingwood says his inclusion and non-inclusion has no effect on England. And that India opting for Jadeja was a decision that reflects logic.

“The four seamers, you know, at Lord’s did fantastically well. They put us under a lot of pressure. And Jadeja is a world-class performer. So you can understand from India’s point of view how to get a second spinner into the side,” he said.

Collingwood said that these doubts over selection are nice for the England camp as it shows India are under pressure.

“We are not going to worry too much about what decision India are to make, it is all about what we have to do. If you put a team under enough pressure then, you are going to have these kind of doubts about the selection of the opposite team. We know that Jadeja is a world-class performer as well and given the conditions, he can cause a lot of problem. With his bat, he balances the side a lot better. So, you kind of understand it but we are not going to focus on selection issues of India.”

On Ashwin factor, he says many of the England batsmen have faced him on turning Indian tracks and that in England with Duke, they will hopefully be able to handle him.

“Obviously we will have to wait and see what the pitch is like. Whether India plays two spinners or just one and bring Ashwin in. We are honestly really focussed on what we need to do. And the guys have played in past. And played against him on turner wickets in India which is not easy and obviously played here with the Duke’s ball. Hopefully, we can combat him in the field if he does play in the next Test.”