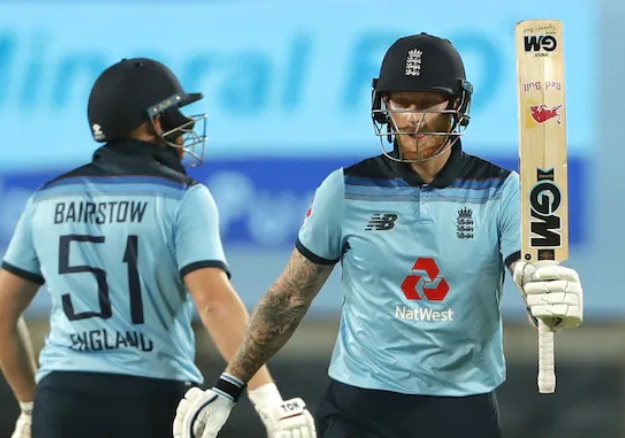 England defeated India by six wickets in the second ODI, at the MCA Stadium in Pune, on Friday. The visitors also leveled the series, 1-1. Chasing a target of 337 runs, openers Jason Roy and Jonny Bairstow started brilliantly for the visitors, piling continuous pressure on Indian bowlers. Roy slammed 55 runs before his departure due to runout. Bairstow was well-supported by Ben Stokes and scored 124 off 112 balls. Stokes missed out on a century, losing his wicket after scoring 99 runs. Dawid Malan (16) and debutant Liam Livingstone (27) remained unbeaten to help their side seal a win, finishing at 337 for four in 43.3 overs. India’s bowling order put in a poor display, with Prasidh Krishna taking two wickets and Bhuvneshwar Kumar registering a dismissal. Earlier, the hosts wrapped up their first innings at 336 for six in 50 overs, with KL Rahul scoring a ton (108 off 114). Virat Kohli (66) and Rishabh Pant (77) also made noteworthy contributions, but couldn’t prevent a defeat for their side. Reece Topley and Tom Curran took two wickets for England. Meanwhile, Sam Curran and Adil Rashid registered a dismissal each.

England did not throw it away like the opening game and capitalized on a flying start provided by Bairstow (124 of 112) and Jason Roy (55 off 52) to gun down the target in just 43.3 overs with six wickets in hand.

Stokes (99 off 62) played a breathtaking knock and missed out on a deserving hundred after a blazing 165-run stand with Bairstow. A mind-boggling 87 runs were scored between the 31st and 35th over. Stokes and Bairstow shared 17 sixes between them.

“We were bitterly disappointed in the first game with the way we played in the chase, but it was pretty clear that we were going out with the same intent as we always do,” Stokes said after the game.

“Great chase, really happy that we managed to get over the line easily especially when India set a challenging total,” he added.
The third and final game is scheduled here on Sunday.

After Roy’s dismissal, Stokes hit sixes for fun, 10 in total, to make the seemingly daunting task a rather comfortable one for the visitors.

Bairstow, who struck his 11th ODI hundred, too was not far behind with seven sixes and 11 fours.

Barring pacers Bhuvneshwar Kumar and Prasidh Krishna, the Indian bowlers had no answer to the onslaught of Stokes and Bairstow, who produced a display of sensational hitting.

Like the previous game, England self-destructed by losing three quick wickets in the middle overs, including the set Stokes and Bairstow.

But debutant Liam Livingstone (27 not out off 21) and Dawid Malan (16 not out off 23) held their nerve to take the team home safely. It was England’s fifth-highest chase in ODI cricket.

Earlier, Rahul, who anchored the innings, hit seven fours and two sixes in his 114-ball knock while Pant plundered seven sixes and three boundaries to help the hosts go well past the 300-run mark.

Skipper Virat Kohli (66 off 79) and Rahul laid the foundation for the big total with their 121-run third-wicket stand after being put in to bat at the MCA stadium.

Opener Shikhar Dhawan (4) fell cheaply after he nicked a Reece Topley delivery to Ben Stokes in the slips.

Kohli joined Rohit Sharma (25), who looked in his elements and hit three boundaries off Topley (2/50).

But in the next over, Curran (1/47) cut short his stay at the crease. Rohit flicked a full pitched delivery straight to Adil Rashid at short fine leg, as India slipped to 37/2.

Kohli and Rahul kept the scoreboard ticking, with the captain being the bit more aggressive one, while Rahul initially played second fiddle.

Kohli, who got a ‘life’ on 35 when Buttler dropped a regulation chance off Adil Rashid, notched up his 62nd fifty with a single.
The duo then completed their 100-run standoff 119 balls, without any fuss. However, Rashid (1/65) removed Kohli, whose thick outside edge was caught by Buttler, with India at 158/3.

Rahul then put his foot on the accelerator, while mostly relying on pulls and drives.

Rahul, who hit his fifth ODI century and Pant then launched himself into England attack. Pant pulled Rashid for his first six, his trademark pull-shot, and did not look back.

Left-handed Pant smacked successive sixes off Stokes in the 41st over, completing his second ODI fifty, in 28 balls.
After Rahul fell, Pant continued his six-hitting show with Hardik Pandya (35 off 16) joining the fun as India amassed 126 runs in the final 10 overs.

This was the second instance when India hit successive 300 plus scores in five ODIs, the other one being in 2017.