India marked their return to international football after 492 days India rallied from a goal down to draw 1-1 against Oman. 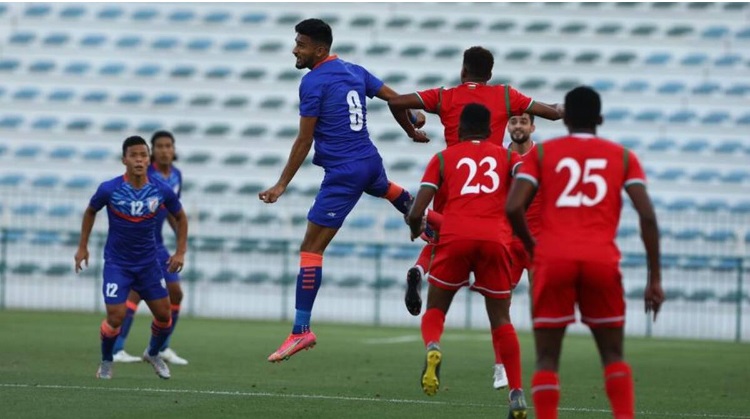 India vs Oman Highlights: A Sunil Chhetri-less India marked their return to international football after 492 days India rallied from a goal down to draw 1-1 against Oman in their first international game since November 2019, at the Maktoum bin Rashid Al Maktoum Stadium in Dubai on Thursday. After conceding in the first half through a Chinglensana Singh own goal, India leveled proceedings in the second half through Manvir Singh.

Oman didn’t take long to take charge of the game, with the Branko Ivankovic-coached side enjoying more possession and spending a significant time in the attacking third.

They had the chance to draw first blood in the 26th minute when Abdul Aziz Al-Muqbali, chasing a ball from the left flank, was brought down inside the Indian box by Rowllin Borges. The referee pointed to the spot and Al-Muqbali himself stepped up to take the spot-kick. His attempt, however, was weak and India goalkeeper Amrinder Singh comfortably saved it after correctly diving to his right.

Amrinder, however, went from hero to villain a quarter of an hour later when he let a low drilled cross from Zahir Al-Aghbari, from an acute angle on the left, slip past him at the near post. It hit the onrushing Chinglensana and the ball slid into the back of the net to hand Oman the lead.

At the start of the second half, Stimac introduced midfielders Lalengmawia—another debutant—and Raynier Fernandes in place of Jeakson and Borges. India’s tempo seemed to change and they hit back 10 minutes into the half, with Bipin’s pin-point cross from the right being headed in by an unmarked Manvir from close range.

With 10 minutes to go, Stimac brought on Lallianzuala Chhangte for Suresh but neither side could create more chances. There was still time for Stimac to bring in one more debutant though, with Mashoor Shereef replacing Manvir just before the final whistle.

India will next face UAE at the Zabeel Stadium in Dubai on Monday.