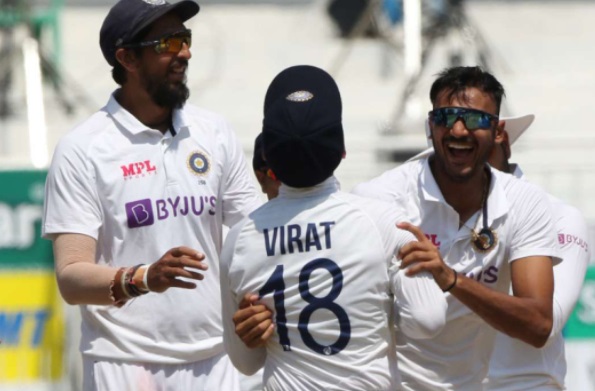 England have registered a first innings score of 112 runs in 48.4 overs on Day 1 of the 3rd Test match, at the Narendra Modi Stadium in Ahmedabad. Axar Patel bagged six wickets for India.

The visitors initially won the toss, and were bowled out in 48.4 overs. Axar Patel was in top form for the home side, registering six wickets. He dismissed Zak Crawley, Jonny Bairstow, Ben Stokes, Ben Foakes, Jofra Archer and Stuart Broad. Meanwhile, Ravichandran Ashwin registered the dismissals of Ollie Pope, Joe Root and Jack Leach. Ishant Sharma, who is also in his 100th Test match, registered the wicket of Dom Sibley. The series is finely poised at 1-1, and this is also the first international match in this venue since its renovation. This is also the second Day-Night Test held in India. England won the first Test match at the MA Chidambaram Stadium in Chennai, by 227 runs. The hosts bounced back in style in the second Test match, winning by 317 runs. Defeat for India would see them out of contention for the World Test Championship final.

Local man Jasprit Bumrah replaced Mohammed Siraj in the India playing XI along with off-spinning all-rounder Washington Sundar, who comes back in place of Kuldeep Yadav.

England had Jofra Archer, Zak Crawley, James Anderson and Jonny Bairstow coming into the side. The players out from the last match are Moeen Ali, Rory Burns, Dan Lawrence and Ollie Stone.

Earlier, the Sardar Patel stadium in Motera near Ahmedabad was renamed as the Narendra Modi Stadium. The stadium’s new name was announced in an inauguration ceremony that was attended by President Ram Nath Kovind, Home Minister Amit Shah, Sports Minister Kiren Rijiju, Gujarat Governor Acharya Devvrat, and Board of Control for Cricket in India (BCCI) Secretary Jay Shah among others.

Toss: England won the toss and opt to bat