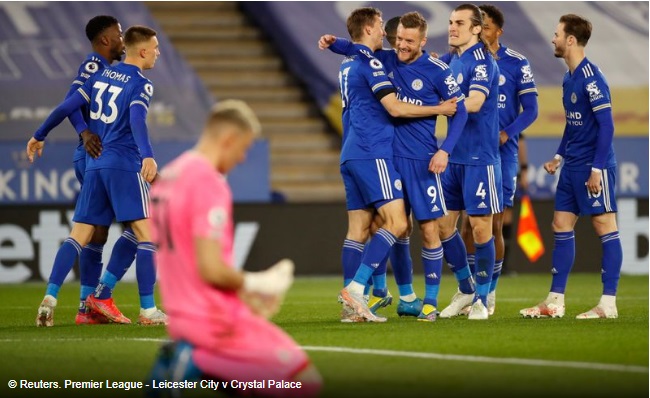 Nigerian Iheanacho set up Leicester’s equalizer for Timothy Castagne just after halftime, then smashed home an 80th-minute winner to complete the turnaround at the King Power Stadium.

Nigerian Iheanacho set up Leicester’s equalizer for Timothy Castagne just after halftime, then smashed home an 80th-minute winner to complete the turnaround at the King Power Stadium.

He has now scored 12 goals in his last nine games in all competitions for Leicester who are closing in on a place in next season’s Champions League.

Thirteenth-placed Palace was the better side in the first half and took the lead through Wilfried Zaha in the 12th minute.

Leicester responded well though to claim the win that moved them seven points ahead of fifth-placed West Ham United.

They have 62 points from 33 games played, five behind second-placed Manchester United and four ahead of Chelsea.

If Leicester do go on to secure the top-four finish that eluded them last season after a late slump, they will have the 24-year-old Iheanacho to thank.

The former Manchester City player was a bit-part player earlier in the season but he has taken his game to new heights since February as Jamie Vardy’s strike partner.

“He is a talented player and when you are a striker the rhythm of games is important and over the last few months he has been absolutely incredible,” Leicester boss Brendan Rodgers said of Iheanacho’s impact.

“The goal he scored tonight was sheer quality.”

With Leicester looking for some inspiration, Iheanacho showed great strength in the 50th minute to get on the end of Youri Tielemans’ pass, shrug off Cheikhou Kouyate, and lay the ball back for Castagne to blast into the top corner.

As Leicester pushed for the winner, Vardy had a goal disallowed for offside and then fired across the face of goal from a tight angle after being played in by Iheanacho.

But Iheanacho produced a moment of stunning quality to seal the points. He showed a great touch to take down a searching pass by Jonny Evans, then cut inside before arrowing an unstoppable shot past Palace keeper Vicente Guaita.

Earlier in the night, Leicester had looked nervous against a Palace side playing with freedom.

Palace took the lead when Tielemans lost the ball in midfield and Eberechi Eze sprinted away before slipping the perfect pass to Zaha who shot past Kasper Schmeichel.

Even after Castagne’s equalizer, Leicester continued to suffer as Palace somehow failed to regain the lead when Jairo Riedewald burst through on goal but instead of taking the chance himself he tried to find Christian Benteke and Evans got back to make a last-ditch intervention.

It was not the best display by Leicester but all that mattered for Rodgers was the victory.

“It was a very important win for us. It was the third game in nine days so a tough schedule,” he said.

“Going one behind against a Roy (Hodgson) team, they’re super organized and tough to break down.

“I thought the players were outstanding. They kept the calmness and control and scored two very good goals.”

FC Goa play out yet another draw, this time 1-1 result against Al Rayyan
Leicester winger Barnes out for season will miss Euro 2020.