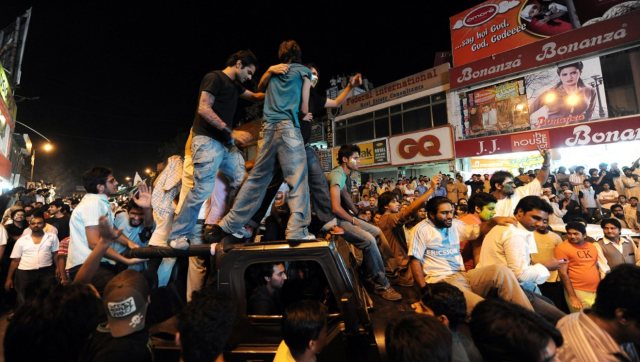 Misbah-ul-Haq had fans from Pakistan and India gasping for breath with his scoop shot off Joginder Sharma in the 2007 World T20 final. Eventually, it was the Indians who heaved a sigh of relief as S Sreesanth took the famous catch to help MS Dhoni and Co script history. India became the first World T20 Champions.

As India rejoiced, their neighbours Pakistan descended into mourning. Losing to bitter rivals from a winning position was going to haunt them for ages. But it was not to be. Just two years later, Younis Khan-led Pakistan buried the ghosts of 2007 loss at the mecca of cricket — Lord’s — to be anointed as world champions. Home of cricket hosts the best

After the landmark T20 World Cup in South Africa that had changed cricket forever, the ICC bandwagon moved to England — the home of cricket — in 2009. A collection of 12 teams including nine Test playing nations and three qualifiers, Scotland, Ireland and the Netherlands took part in the mega event. One Test nation — Zimbabwe — had to give the tournament a miss owing to the political tensions between Great Britain and President Robert Mugabe-led African nation.

The 12 sides were divided into four groups with each of them having three teams. The top two teams from each group qualified for the Super Eight where two groups of four teams each were formed. The top two sides from these groups made it to the semi-finals.

The World Cup had begun with hosts England taking on the Netherlands, or should we say, with the Associate side causing the setback of the tournament. England lost the game by five wickets that had Tom de Grooth playing an outstanding knock of 49 off 30 to help the Netherlands chase down the stiff target of 163 after the batters of the cricket giant failed.

While England recovered in time to reach the Super Eight, more surprises were in the store. Australia, that were constantly failing to live up to their favourites tag in the T20 format, made an exit from the group stage after suffering two heavy defeats against West Indies and Sri Lanka. Bangladesh lost to qualifiers Ireland and had to give up on the next round spot with defending champions India topping the group.

India’s hopes of defending the world title were dashed as they suffered a narrow three-win run defeat to England, after losing to West Indies in the second round of the tournament. Chasing 154 at the Lord’s, India lost two quick wickets and in a surprising move rookie, Ravindra Jadeja was promoted to No 4 ahead of Yuvraj Singh and MS Dhoni. This was the India captain trying to pull a rabbit out of the hat but the move backfired as an under-pressure Jadeja consumed 35 balls for his innings of 25.

Ryan Sidebottom celebrates with the England team after beating India during the Super Eight stage of the 2009 World T20. AFP

Eventually, the equation came down to 19 off the last six balls with Yusuf Pathan and Dhoni at the crease. And even though Pathan hit a six and Dhoni smacked a four in the final over, Ryan Sidebottom held onto his nerves as England clinched a nail-biter.

The elation, however, was short-lived. England were knocked out on the very next day after losing to West Indies who made their way into the semi-finals. South Africa and Sri Lanka also joined them in the last four. Pakistan were the fourth team who qualified by beating Ireland, a victory which somewhat helped them to avenge the shock loss against the same opponent in the 2007 ODI World Cup.

Pakistan triumph in battles of nerves

South Africa and cricket World Cup, never has there been a story of more woe than this combination. The Proteas marched into the last four by winning five straight games, the unbeaten team had the momentum on their side but they crashed into a Shahid Afridi-inspired Pakistan that proved to be unmovable on that day.

Afridi slammed a quick-fire 54 off 31 as Pakistan huffed and puffed to a below-par 149/4. The maverick all-rounder then turned the game on its head with his bowling, dismissing Herschelle Gibbs and AB de Villiers in his first two overs. Jacques Kallis (64) and JP Duminy (44) tried to lift the World Cup curse but they eventually fell short by seven runs. In the other semi-finals, Sri Lanka registered a comprehensive 57-run win over West Indies to reach their first T20 World Cup final.

It was another box-office Afridi performance, aided by Abdul Razzaq’s 3/20, that paved the way for Pakistan in the summit clash. Batting first, Sri Lanka had a tumultuous start as 17-year-old Mohammad Amir rocked their boat in the first over by dismissing tournament top-scorer Tillakaratne Dilshan. Only four Sri Lankan batters managed to get into double-digit scores and Kumar Sangakkara was the lone half-centurion as Sri Lanka posted 138/6.

There was no twist in the tale as Pakistan began their chase. The openers gave them a strong start and Afridi, who took one wicket earlier, hammered 54 off 50 from No 3 spot to take Pakistan to the world title. Cricket fans in Pakistan celebrate their country’s World T20 win on the streets of Islamabad in 2009. AFP

Sports can be cruel at times, but when it isn’t, it has the power to heal some of the deepest wounds. If the 2007 World T20 final loss was akin to a twist of a knife in the heart, the 2009 title win worked as a potion that mended the broken hearts and filled them with umpteen joy. On 21 June 2009, the streets that had gone dark and gloomy after the loss two years back, played the hosts to the biggest party on the earth as Pakistan finally buried the ghosts of the 2007 loss.