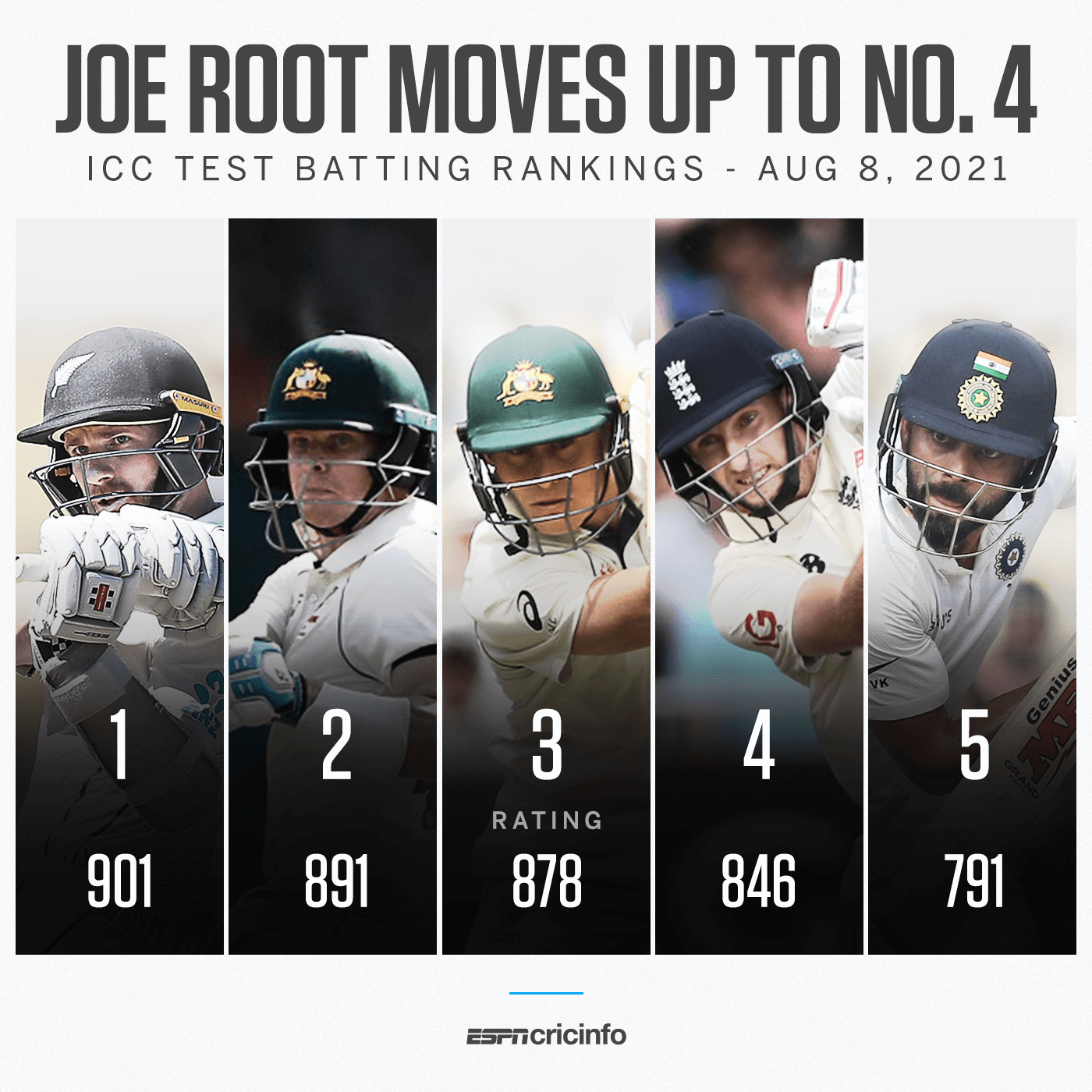 India skipper Virat Kohli and opening batsman Rohit Sharma remained firm at their respective fifth and sixth spots, but England captain Joe Root jumped two spots to claim the second position in the ICC men’s batting Test Rankings. Root’s valiant 180 not out in the first innings of the Lord’s Test has taken him to within striking distance of top-ranked batter Kane Williamson in the Test rankings. The England captain, who started the series against India at fifth place and overtook Kohli after the first match, has risen another two spots to seal the second position after the Lord’s Test.

Root, a formerly top-ranked batter in the format, is on 893 rating points, only eight behind New Zealand skipper Williamson.

KL Rahul, who was adjudged player of the match in the Lord’s Test, moved up 19 places in the rankings after his 129 runs in the first innings. The 29-year-old is now on 37th spot.

Among bowlers, veteran pacer James Anderson moved up a place after his five-wicket haul in the first innings against India at Lord’s.

Mohammed Siraj and Mark Wood also jumped up the ladder with impressive show with the ball. Siraj picked up eight wickets while Wood got five in the second Test. Siraj is on 38th place while Wood is on 37th.

In another Test match that ended recently, Pakistan lost a thriller to the West Indies but Babar Azam’s half-century in the second innings saw him move up two spots to reach eighth in the rankings.

For the West Indies, who won the first Test by one wicket, Jermaine Blackwood has gained nine slots to reach 35th position after scoring a half-century in the second innings.

All-rounder Jason Holder is up to five spots to 43rd position in the batting rankings and captain Kraigg Brathwaite, who missed the first-innings century by three runs, has advanced 18 places to go at 45th spot.

Holder has also moved into the top 10 in bowling rankings. His four wickets in the match lifted him to the ninth position.

Fast bowler Jayden Seales has soared 39 places to 58th after the eight-wicket match haul, while Kemar Roach has moved up to the 11th spot.

For Pakistan, left-arm fast bowler Shaheen Afridi has gained four slots to reach 18th position after taking four wickets in each innings, and Faheem Ashraf is up to four places to 71st.