‘I can die’: Medvedev survives extreme heat at Tokyo Olympics 2020 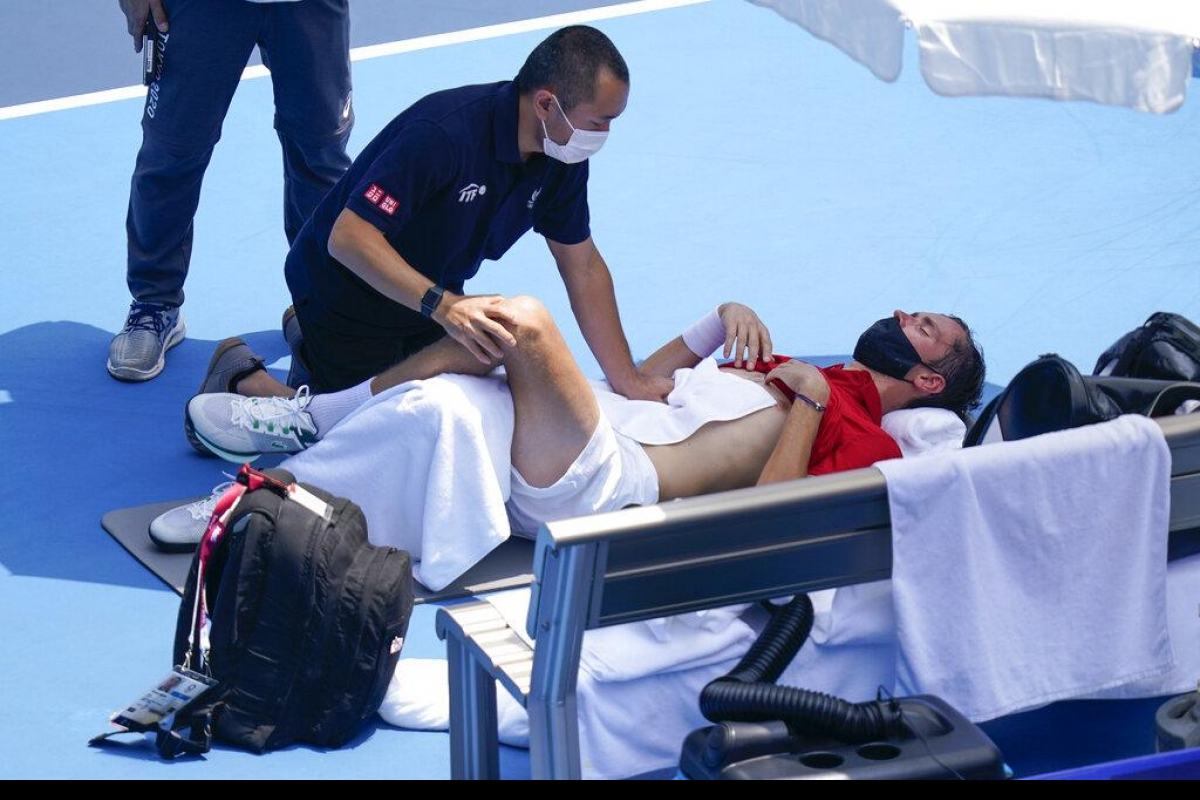 Daniil Medvedev was struggling so much with the suffocating heat and humidity at the Ariake Tennis Park on Wednesday that at one point the chair umpire, Carlos Ramos, asked him if he could continue playing.

Bent over in exhaustion before serving. Resting on his racket between points. Grasping for a rubber tube blowing cool air next to his seat on changeovers. Two medical timeouts and one visit from a trainer.

Daniil Medvedev was struggling so much with the suffocating heat and humidity at the Ariake Tennis Park on Wednesday that at one point the chair umpire, Carlos Ramos, asked him if he could continue playing.

“I can finish the match but I can die,” Medvedev replied. “If I die, are you going to be responsible?”

Afterwards, Medvedev said he felt “darkness” in his eyes.

“I didn’t know what to do to feel better,” the ROC player added. “I was ready to just fall down on the court.”

Somehow, the second-seeded Medvedev still pulled out a 6-2, 3-6, 6-2 win over Fabio Fognini of Italy to reach the quarterfinals at the Tokyo Olympics.

Spanish player Paula Badosa was less fortunate. She left the court in a wheelchair after retiring from her quarterfinal match against Marketa Vondrousova because of heatstroke.

Badosa also had to withdraw from a mixed doubles match later with partner Pablo Carreno Busta.

Vondrousova, the Czech player who eliminated Naomi Osaka a day earlier, had won the first set 6-3. She’s now in the semifinals and into the medal rounds and will next face fourth-seeded Elina Svitolina of Ukraine. Ninth-seeded Belinda Bencic of Switzerland will play 15th-seeded Elena Rybakina of Kazakhstan in the other semifinal match.

After some rain a day earlier, the temperature rose to 88 degrees F (31 degrees C) but the heat index made it feel like a sizzling 99 degrees F (37 degrees C).

The problems the players faced raised questions over why organizers did not grant requests earlier in the tournament from Medvedev and other players — including top-ranked Novak Djokovic — to move all of the tennis matches at the Games to the evening.

As Wednesday’s play neared its conclusion, organizers announced that matches would begin at 3 p.m. starting Thursday to make it easier on the players. Matches had been starting at 11 a.m.

Djokovic’s quarterfinal opponent will be Kei Nishikori of Japan, who reached his third straight Olympic quarterfinal by beating Ilya Ivashka of Belarus 7-6 (7), 6-0.

Djokovic then won again with Serbian partner Nina Stojanovic in the opening round of the mixed doubles competition. They beat Marcelo Melo and Luisa Stefani of Brazil 6-3, 6-4.

In singles, Djokovic is attempting to become the first man to achieve a Golden Slam by winning all four Grand Slam tournaments and Olympic gold in the same calendar year.

Djokovic has already won the Australian and French Opens plus Wimbledon this year, so now he needs the Tokyo Games title and the U.S. Open trophy to complete the unique collection.

“It was a battle to see who was capable to resist more. After 10 or 12 groundstrokes we were like ‘The Walking Dead,’” Schwartzman said, referring to the popular TV series.

Fourth-seeded Alexander Zverev of Germany also reached the last eight and will play Jeremy Chardy of France with a potential semifinal match against Djokovic looming ahead.

It’s been quite a month for Svitolina, who married French player Gael Monfils before flying to Tokyo and beat Camila Giorgi of Italy 6-4, 6-4 on Wednesday. Monfils was sitting courtside cheering on his new bride, having already been eliminated from both the singles and doubles tournaments.

The couple got married on July 16 but have delayed their honeymoon until November, when the tennis season ends.

Svitolina is the highest-seeded singles player remaining after top-ranked Ash Barty, No. 2 Osaka and No. 3 Aryna Sabalenka each lost in the earlier rounds.

In men’s doubles, Andy Murray and British partner Joe Salisbury lost to Marin Cilic and Ivan Dodig of Croatia 4-6, 7-6 (2), 10-7. Murray, who was the two-time defending gold medalist in singles, withdrew from that competition because of a right quad strain.

Medvedev received medical treatment and had his chest massaged while leading 5-2 in the opening set but then held his serve in the next game to close it out. He then took another medical timeout while trailing 4-3 in the second.

“I felt like my diaphragm has blocked,” Medvedev said. “I couldn’t breathe properly. It was the most humid day we had so far — maybe the hottest.”

With so much suffering, Medvedev took his time between points, which drew protests from Fognini.

Both players were allowed to leave the court for 10 minutes between the second and third sets with an extreme heat rule in effect.

Medvedev said he took a “cold, freezing shower” during the break but that the sharp change in temperature put his body into shock and caused him to cramp.

After holding for a 5-2 lead in the third, Medvedev received yet more medical treatment when a trainer came out onto the court and massaged his left arm and thigh.

Fognini slammed his racket onto the court in disgust when the match was over, then picked the racket up and placed it in a court-side trash can.