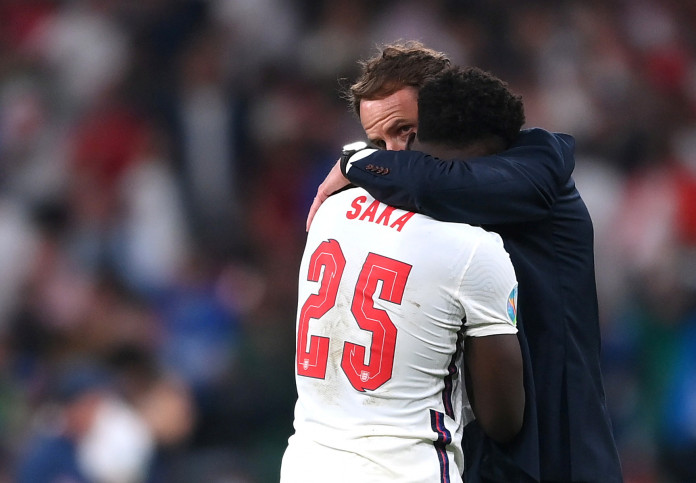 Seeing a promising youngster of his team going through one of the toughest phases of his career, Arsenal manager Mikel Arteta said he had spoken to Bukayo Saka after the Euro final, which Italy won on penalty shootout.

It has been a tough few days for England youngster Bukayo Saka. If missing the last spot-kick in the Euro 2020 final against Italy was not disappointing enough, Saka was subjected to racial abuse on many social media platforms. Seeing a promising youngster of his team going through one of the toughest phases of his career, Arsenal manager Mikel Arteta said he had spoken to Saka after the Euro final, which Italy won on penalty shootout after the two teams could not be separated in 120 minutes of action.

Arteta said Saka is a ‘strong character’ and backed the teenager to overcome the racial attacks.

The comments prompted a police investigation and brought widespread condemnation.

Arteta told Sky Sports he had spoken to Saka and that was sure that he would be fine.

“He is such a strong character,” Arteta added. “He has received a lot of love and support from world football, not only with Arsenal but the national team and the English fans because he doesn’t deserve anything like (what) he has been through.”

British Prime Minister Boris Johnson held a meeting with social media companies on Tuesday to ask them to do more in the fight against online abuse.

“… Hopefully the laws will become stronger. I think we’re all going to try and make a strong case out of that,” Arteta said. “Hopefully, it can have a big impact because it’s the moment to put that right.”

Apart from Arteta, England football captain Harry Kane, manager Gareth Southgate, the respected clubs that Sancho, Saka and Rashford represent have all come out to support the youngsters and condemn the racial attack against them on social media.