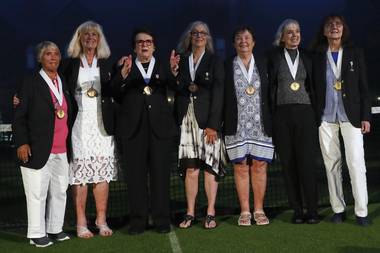 American Jenson Brooksby beat Jordan Thompson, 6-3, 7-6 (3) to advance to the final of the Hall of Fame Open.

Brooksby is the second-youngest player to reach the final in the tournament’s 45-year history on Newport’s grass courts, the only tourney played on grass in North America.

“I was playing better at the end of the second set and brought that confidence to the tie break,” Brooksby said.

Brooksby will be playing in his first ATP Tour final. The 35-year-old South African is seeking his seventh tour title.

The matches were held prior to induction ceremonies into the International Tennis Hall of Fame.

“It’s a great step forward for me,” said Anderson, who had knee surgery last year. “Getting through a bunch of matches this week is a step ahead in the progress.”

The “Original 9” — a group of trailblazing women who started their own tour in 1970 ¬— highlighted the 2021 class along with former Australian star Lleyton Hewitt, who was unable to attend because of travel restrictions due to the COVID-10 pandemic. He’s expected to be honoured, in person, next summer.

The Original 9’s move led to the establishment of the Women’s Tennis Association, which started in 1973.

Also, the Hall was set to enshrine its class of 2020: Croatia’s Goran Ivanišević and Spaniard Conchita Martínez. Last year’s ceremony and the tournament were postponed due to the pandemic.

Brooksby captured the final three points of the match that ended with fog rolling in and temperatures dipping a bit from the low 80s. Thompson hit a forehand that was called out and upheld on a challenge, ending it in 2 hours, 1 minute.

“It definitely was a little different. I wasn’t expecting it, going from hot and humid,” he said of the quick weather change. “The court was a little slippery. I know he did talk to the referee to try to get play stopped.” Anderson, the eighth seed, forced the third set by winning the final three points of the tiebreaker.

“Even though I was getting more fatigued, I found my serve in the second half of the match,” Anderson said.