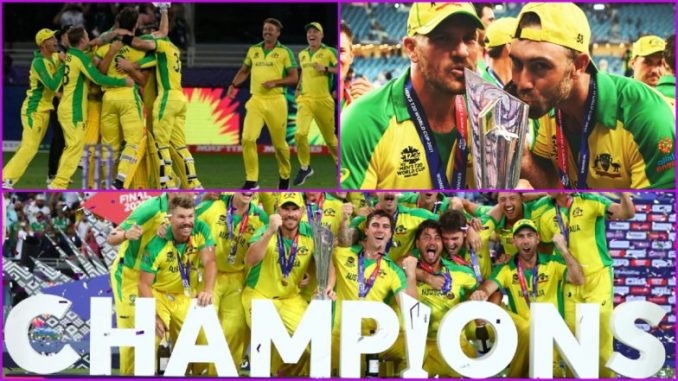 On 14 November, Sunday, Australia were crowned the new champions of the T20 World Cup when they overpowered Kane Williamson’s New Zealand in the final in Dubai. With the win, Australia completed their clinching of trophies across the limited-overs formats, with the World Test Championship being the elusive one.

It was a memorable final for the Aussies, as Mitchell Marsh (77*) guided them to the title, and ending their T20 World Cup trophy drought.

Here, we take a short look at the six World Cups they have won so far:

In 1987, David Boon inspired Australia to a maiden ODI World Cup title, thereby being the third country to clinch the crown. Boon scored 75 in the final to take Australia to 253/5, and in reply, England could only manage 246/8 in Kolkata.

And 12 years later, it was the beginning of an era in Australian cricket — a run of three successive World Cup trophies. The 1999 final was against Pakistan, who won the toss, opted to bat but only managed to put up 132 after a delayed start due to rain. Adam Gilchrist (54) and Mark Waugh ( 37*) starred as Australia, under the leadership of Mark’s brother Steve, eased to an eight-wicket win.

Four years later, we all know what happened — a thrashing of India, which was scripted by skipper Ricky Ponting ( 140*) and Damien Martyn (88*).

Under Ponting’s leadership, Australia added a third title four years later in the West Indies, with another dominant display against Sri Lanka this time. Gilchrist (149) was once again in the centre of attention.

While the 2011 edition of the quadrennial mega event did not turn out well for the Aussies with a quarter-final exit, they returned stronger under Michael Clarke four years later, having it easy against New Zealand after the latter put up just 183 on board. That was the last appearance for certain Aussie legends at the big stage, including Brad Haddin and Michael Clarke.

Come 2021, Australia, after a long 14-year wait since that semi-final against India in 2007, would go onto clinch their maiden T20 World Cup title, under Aaron Finch. Mitchell Marsh roared, David Warner proved critics wrong with a splendid getting display throughout the tournament, and the men in yellow finally got their hands on the trophy they had been waiting for, with a convincing win over the Kiwis.

Apart from the World Cup wins, Australia have also won the Champions Trophy, in 2006 and 2009, having beaten West Indies and New Zealand respectively, making it eight ICC trophy wins in total.