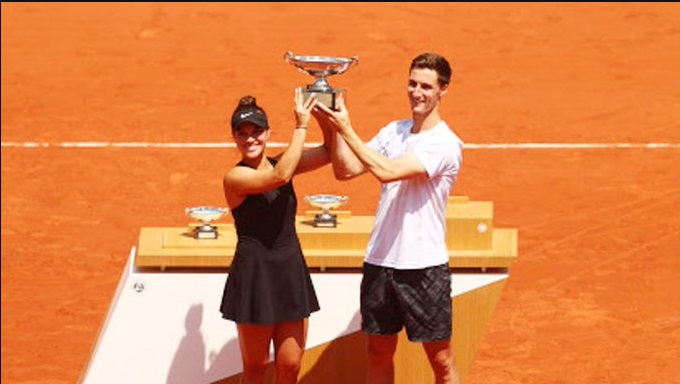 Krawczyk and Salisbury rallied from a set down to beat the Russian pair of Elena Vesnina and Aslan Karatsev 2-6 6-4 (10-5) to clinch the title on a sun-bathed Philippe Chatrier court.

The Russians looked in control and broke their opponents’ serve twice in the opening set to take the lead, before Krawczyk and Salisbury converted their only breakpoint opportunity late in the second set to take the match into a deciding tie-break.

They carried the momentum into the tie-break and opened up a 4-0 early lead, which was enough in the end.

Britain’s last title at the clay-court Grand Slam had also come in mixed doubles when John Lloyd partnered with Australian Wendy Turnbull to win one of the five main draw titles in 1982.

Mixed doubles, which features only at the four Grand Slams and is not played on the professional tours, was not played last year at Roland Garros due to the Covid-19 pandemic.

The match could have taken a controversial turn when chair umpire Carlos Ramos ruled an ace from Salisbury to have landed out on 40-0 in the second set even as the team had taken their seats for the break before the match tie-break.

Salisbury argued that the umpire was mistaken about the mark where the ball landed but to no avail.

Salisbury ended up with a double fault on that point, then lost a second point on serve before finally managing to level the match on the third set point.