French Open: Players Will Have To Play Well To Beat Me, Says Daniil Medvedev After Third Round Win 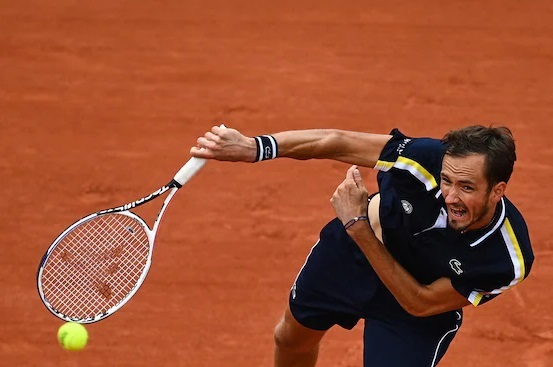 Russian Tennis player Daniil Medvedev is enjoying his run on the clay at Roland Garros. Backing his form, the current world number two believes that to beat him, the guys have to play well. “Clay at Roland Garros feels great this year,” the ATP website quoted Medvedev as saying. “As I said after the first round [versus Alexander Bublik], now I know that to beat me, the guys have to play well. I am definitely happy with my game and my return today because I actually hit more aces than him. That’s a great achievement,” he added.

Daniil who is relishing the career-high ranking of No. 2 in the world, brushed aside Reilly Opelka 6-4, 6-2, 6-4 in the French Open third round.”It’s definitely never an easy draw to play Reilly,” said Medvedev.

“Of course, indoor hard courts would be tougher than outdoor clay courts,” he said.

“He made his first semi-final in [an] ATP Masters 1000 on clay. I think a little bit [the] rainy conditions, wet, heavy court, which I totally hate on clay, helped me today,” he added.

“In these conditions, even guessing one side, I could still get back to another side if I saw the serve coming the other way,” he said.

Notably, Medvedev has a golden chance to replace Novak Djokovic as the World No. 1 in the ATP Rankings if he reaches the final in Paris and the 18 times Grand Slam winner does not.

The 25-year-old Russian will now face 22nd seed Cristian Garin in the round of 16 of Roland Garros. Daniil Medvedev and Cristian Garin are tied 1-1 in their head-to-head meetings.