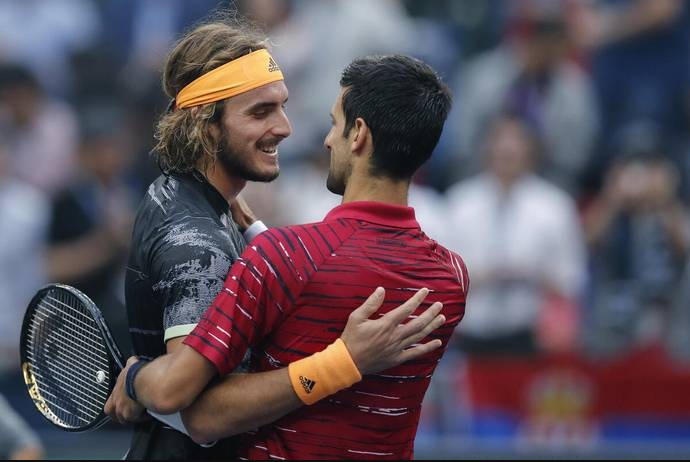 Stefanos Tsitsipas was once described by Novak Djokovic as having “the traits of a champion” and on Sunday he will hope to prove the Serb’s glowing reference was not a misjudgement.

The charismatic 22-year-old, one of the widely-touted ‘NextGen’ of the sport looks to land the first significant bodyblow on the old guard when he tackles the world number one for the French Open title.”He is a hard worker, dedicated, nice guy,” said Djokovic.

“He’s very smart and wise. I love the fact that he is more than just a tennis player and he’s always looking to learn from experience and to understand something new about himself.

“That’s the trait of a champion, of someone who has great potential to be number one in the world and win Slams and be a great ambassador for the sport.”

Blond-haired and standing 6ft 4ins (1.93m) tall, Tsitsipas is the sport’s picture-perfect public face and widely expected to be the natural heir to the likes of Djokovic, Rafael Nadal and Roger Federer.

He is already the youngest player to have defeated all three, completing the admirable task before he was 21.

He is the first Greek man or woman to make a Slam final and already has seven career titles to his name including the prestigious ATP Finals in 2019.However, there is still much to prove.

He has won just twice overall in seven meetings with Djokovic with the Serb claiming both meetings on clay – in a five-setter in the French Open semifinals in 2020 and then in Rome on the eve of Roland Garros.

When Djokovic and Nadal made the final in Rome, the Serb only half-jokingly said: “The Next Gen young people? Me, Rafa (Nadal) and Roger (Federer) are reinventing the Next Gen. We are the Next Gen.”

Tsitsipas is 2-7 against Nadal although he did come back from two sets down to beat the Spaniard in the Australian Open quarterfinals and was a match point away from shattering the Spaniard’s mastery of the Barcelona clay court.

Against Federer, he is 2-2 having won their most recent encounter at the 2019 season-finale in London.

Off the court, Tsitsipas is studious, often contemplative.

He speaks Greek, English and Russian and says he is keen to master Spanish and Chinese.

But his outlook on life and sport is marked by a near-death experience in 2016 when he almost drowned off the coast of Crete.He and a friend were in danger of being swept away by the current.

The boys were saved by the player’s father Apostolos who swam in and guided them back to safety.

“If we were supposed to die and lose our lives that day, we would have to do it together. He was a hero,” Tsitsipas said in a video describing the incident.

“That was the day I saw life with a different perspective. I remember after that how much psychologically it changed me.”