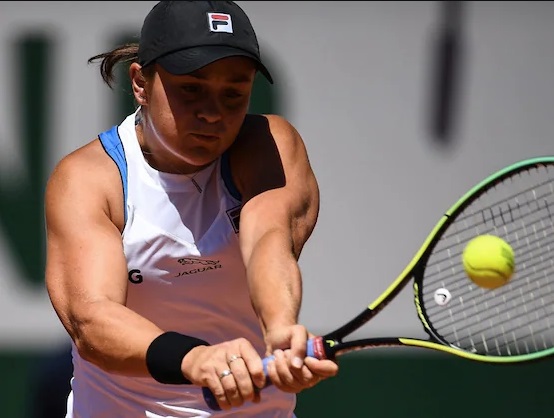 World number one Ashleigh Barty survived a French Open scare on Tuesday as the fallout from Naomi Osaka’s withdrawal and revelations over depression and anxiety sent shockwaves through Roland Garros. Top seed Barty marked her return to Paris for the first time since her 2019 title triumph by beating American left-hander Bernarda Pera 6-4, 3-6, 6-2. Barty, 25, skipped the defence of her title in 2020 due to the pandemic but this year has won trophies at the Yarra Valley Classic, Miami and on clay in Stuttgart in the run-up to Roland Garros.

After easing through the first set on Court Philippe Chatrier, Barty went off the boil in the second and called for the trainer at the changeover.

The Australian had arrived on court with a heavy strapping on her leg having also suffered a tournament-ending abdomen injury in Rome two weeks ago.

However, she broke the 70th-ranked Pera for a 4-2 lead in the decider and never looked back.

Meanwhile, the fallout from Osaka’s withdrawal continued to be felt.

The 23-year-old world number two, and four-time major winner, pulled out on Monday after she was fined $15,000 and threatened with disqualification for refusing to attend press conferences.

Osaka claims traditional post-match media conferences are akin to “kicking people when they’re down” and were having a detrimental effect on her mental health.

She revealed she had been suffering bouts of depression since her 2018 US Open title breakthrough as well as anxiety attacks.

Her decision attracted widespread sympathy and accusations over the role of the media in the affair.

“There’s a sense of voyeurism around how it presently works,” wrote Peter Terry, a professor of psychology at the University of Southern Queensland in Australia on theconversation.com.

“Perhaps some want to see athletes crumble and break down into tears, having put them on a pedestal.

“Osaka is a young, introverted, anxious person. We should by now understand that sports stars are not super human, that they have the same doubts and mental health issues as everyone else.”

The Czech 11th seed, a Roland Garros semi-finalist in 2012 and 2020, had saved a match point in her first-round win over Belgian qualifier Greet Minnen on Sunday.

“It is with great disappointment that I announce my withdrawal from Roland Garros,” said the 31-year-old.

“During my post-match press requirements on Sunday I fell and hurt my ankle. Unfortunately, after an MRI and much discussion with my team, I have made the tough decision that it would be unwise to play on it.”

Svitolina, a three-time quarter-finalist in Paris, will face world number 75 Ann Li of the United States for a place in the last 32.

Li marked her French Open debut with a 45-minute 6-0, 6-1 demolition of Margarita Gasparyan.Svitolina said she hoped to see Osaka back on tour.

“She made her decision, and I wish her a speedy recovery because it seems like it really damaged her mentally,” said the Ukrainian.