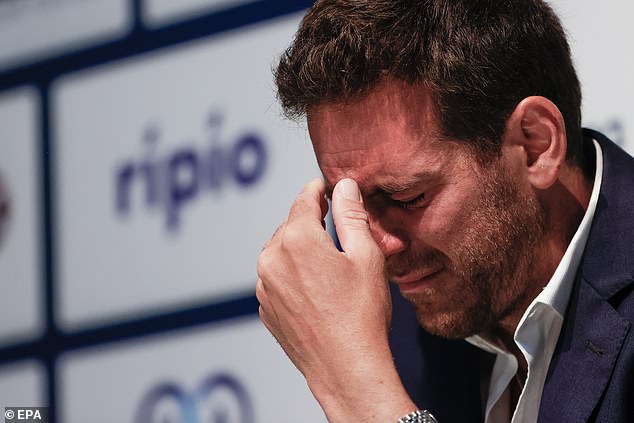 Buenos Aires, Argentina: Former US Open champion Juan Martin del Potro said Saturday his comeback next week after two and a half years of injury is “more a farewell than a return” to tennis.

Del Potro is set to announce his retirement after he plays at the Argentina Open in Buenos Aires, his first tournament since fracturing his kneecap in June 2019 at Queen’s in London.

The former world number three has undergone four surgeries on his knee for that injury while slipping to 757 in the world rankings.

The 33-year-old Del Potro, who beat Roger Federer in the 2009 US Open final, said his knee troubles had him “living a nightmare”.

“It’s more a farewell than a return. I’ve tried different treatments and seen doctors for many years, and I never imagined retiring from tennis without playing,” he said at a press conference.

“I couldn’t find a better tournament than Buenos Aires to be able to do it. After this week, I’ll think about the future.”

The injury-prone Argentine also broke his knee at the Shanghai Masters in October 2018 and before that suffered multiple wrist injuries that also required four surgeries.

Del Potro won the last of his 22 tour titles at the Indian Wells Masters in 2018.

He took silver and bronze at the Olympics and helped his country win the Davis Cup in 2016.

Del Potro last played the Argentina Open as a 17-year-old in 2006, losing in the first round to former world number one Juan Carlos Ferrero.

Should this week see the end of Del Potro on tour, he will leave with his peers hailing his game and his character.

“He treats others the way he wants others to treat him,” Djokovic said of the respect Del Potro commands in the locker room after defeating him in the 2018 US Open final.

“I think that’s why people love him.

“He respects everyone. He fights every match from the first to the last point. I think people can relate to that and appreciate what he brings to the tennis.”

However, the big Argentine was never to conquer his physical demons.

Unable to defend his US Open title in 2010, Del Potro reached a low point in 2015, playing just four ATP matches.

“I was close to quitting this sport because I couldn’t find a way to fix my wrist problems,” he said. “I got depressed for couple of months also. That was the bad moment for me.”

The massive forehand and punishing serve of his early years remained constant, the two-handed backhand became a dangerous weapon along with the slice backhand he introduced to reduce the stress on his troublesome wrists.

His extended time away from the game may have denied Del Potro the chance to elbow his way in among the space monopolised by Nadal, now a 21-time major winner, and 20-time Slam champions Federer and Djokovic.

But his 10 career wins over number one-ranked players are the most by any player never to hold the number one ranking — and further proof, Djokovic said, that Del Potro belonged among the elite.

Rohan Bopanna And Ramkumar Ramanathan Reach Doubles Final Of Tata Open Maharashtra
IOC: Meeting with Peng to go ahead but no details provided