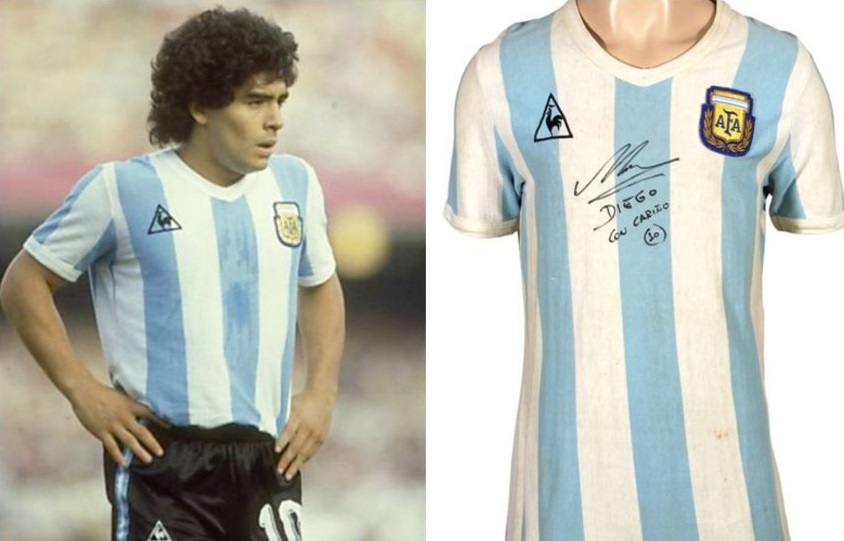 NEW YORK – A “once-in-a-lifetime” signed football jersey worn by late great Diego Maradona in his first-ever World Cup match has hit the auction block, with the potential to fetch a super-sized purse equal to his enormous fame.

Maradona, who led Argentina to World Cup glory in 1986, is widely considered one of the greatest players ever, and his death at age 60 last year plunged the world of international sport into a period of mourning.

The blue-and-white striped jersey, which Maradona wore in his World Cup debut in a group stage match against Belgium in 1982, features his signature on the front in black ink and is expected to pull in an estimated US$150,000 (S$200,000) to US$200,000, according to New Jersey-based auctioneer Gotta Have Rock and Roll.

“As far as a public auction, there’s never been a piece like this. And it’s hard to say there will be again,” said Gotta Have Rock and Roll project manager Alex McNicholl.

“Just knowing what Maradona has done for the game at an international level and how this jersey was the start of his international career, it’s very remarkable and it really is a one-of-a-kind piece.”

Interest in Maradona memorabilia erupted after his death, with the shirt he wore in the infamous 1986 World Cup quarter-final match against England, where he scored his “Hand of God” goal, worth an estimated US$2 million, according to an American expert.

Former England midfielder Steve Hodge, who owns the item, has insisted, however, that it is not for sale.

McNicholl told Reuters that the 1982 jersey, which came to the auction house from an Argentine journalist, is a museum-caliber piece.

“It’s hard to be a fan of soccer and not know what Maradona has done for the game,” said McNicholl. “Every soccer fan is a Maradona fan.”