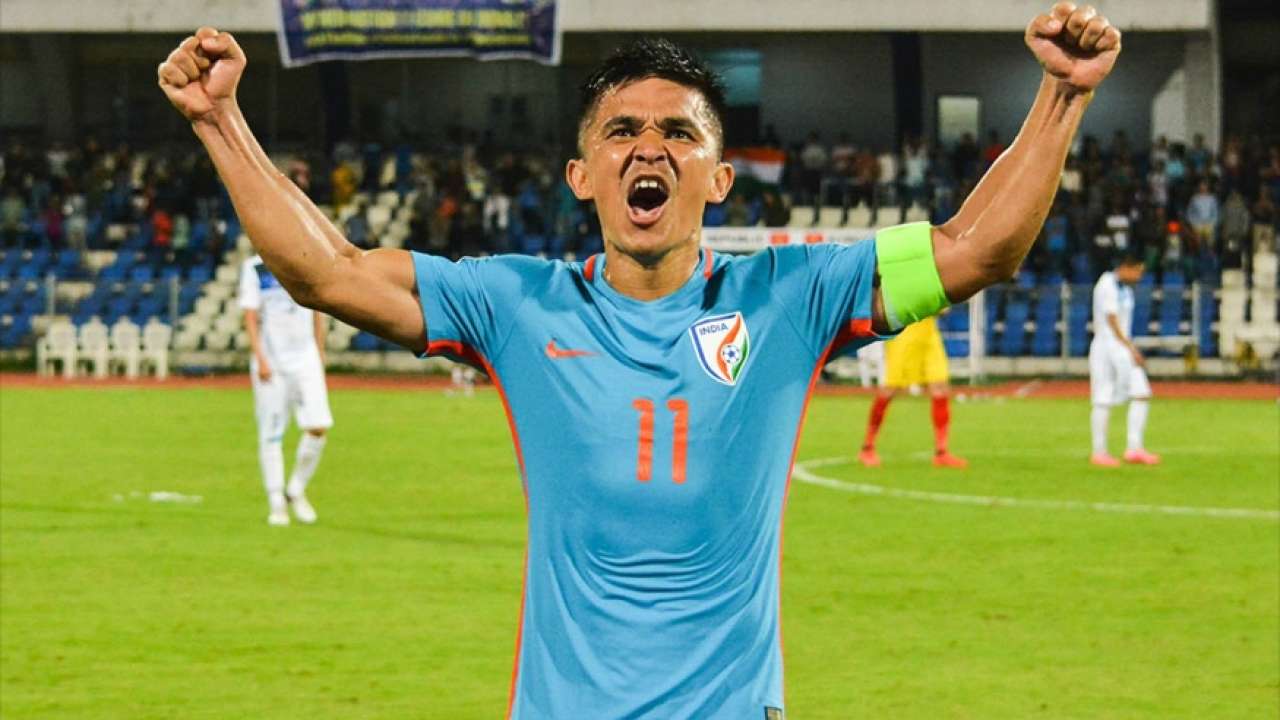 New Delhi: Indian talisman Sunil Chhetri says he hopes to continue playing and scoring goals for the country in the “foreseeable future”, his battle-hardened body getting a booster dose in the form of a landmark 77th international strike that drew him level with Pele.

Chhetri, 37, equalled the legendary Pele when his 83rd-minute strike helped India beat Nepal 1-0 and saved his side from elimination in the SAFF Championship in Maldives on Sunday.

Even as his team goes through a prolonged lean phase, Chhetri’s goal-scoring prowess remains as good as ever, which is a testament to his consistency and dedication.

“I keep getting asked about my consistency, and I wish I had an answer. But the truth is, there is no blueprint. It’s more about wanting to turn up every single day and give it my best, which, thankfully, I’ve never fallen short of,” Chhetri told PTI after his latest strike.

Through his glorious journey, the deadly poacher from Delhi has played alongside former stars such as Bhaichung Bhutia and Renedy Singh in the national team, besides well-known international players in the ISL and I-League.

“I have been extremely lucky to have played with some great footballers who don’t get enough credit. I’ve learned something from every single coach I have played for. It’s the coming together of many things — big and small — and I hope to keep doing it in the foreseeable future,” he added.

Notwithstanding the occasional chatter around his age and his longevity, the Indian captain wants to keep playing in top-flight and has not given his future any thought.

“It might sound like a lie, but I’ve never given my future as a footballer any thought. Like I said, the one thing I probably do the best is wake up and turn up to train and play. I look forward to it, thoroughly enjoy it and haven’t ever wanted to stop doing it.

“My future plan with football is literally what my next training session will look like. I am fortunate enough to have a support system around me that makes sure I don’t need to think or worry about anything that isn’t football. It just makes it all the more easier to love what I do.”

Playing in his 123rd match for India, Chhetri struck a late goal on Sunday to place himself on a par with the Brazilian great (77 goals from 92 matches).

He is now joint third with UAE’s Ali Mabkhout (77) on the list of highest scorers among active footballers, behind Cristiano Ronaldo (112) and Lionel Messi (79).

Despite his innumerable achievements as a top-class striker at both international and club level and his success with the teams he has played for, Chhetri remains as hungry as ever.

“If there’s a trophy up for grabs, then I want to win it — it’s as simple as that. There’s not too many athletes or teams that are content with what’s in their trophy cabinet. I’m no different.

“On an individual level, I am not a big fan of statistics, milestones and accolades. Don’t get me wrong, I am grateful for all that I’ve got and achieved. But to win with my team — for country and club, that is everything.”

As with other sports, the COVID-19 pandemic has affected the plans of most football teams and the India and Bengaluru FC striker is glad to be playing the game at the moment.

“Ever since international football restarted after the pandemic we have been utilising every FIFA window. Unluckily, I missed out on the matches against Oman and UAE in March (after testing positive for COVID). Those are the kind of matches which Indian football needs.

“At the same time, I understand that getting good games is tough owing to all the restrictions that pandemic has brought along with it.”

There will be plenty of activity surrounding women’s football in India next year (the country is hosting the AFC Asian Cup and FIFA U-17 World Cup), and Chhetri is delighted that the women have started getting opportunities to show their mettle in the sport.

The day Chhetri scored his 77th international goal, the Indian women’s team won their first of the two friendlies in Bahrain in a convincing manner.

“What also pleases me is that the Indian ladies have been travelling on exposure tours in preparation for the forthcoming AFC Women’s Asian Cup, and it was only last night they beat Bahrain 5-0.

“Like I always say, we need to keep playing better opponents if we are to improve and measure where we are, and how much more we need to do.”