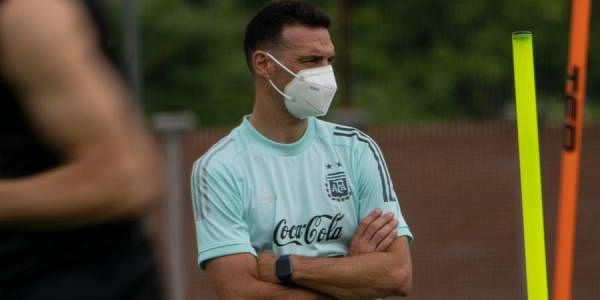 His assistant coach Pablo Aimar will also stay in Argentina for Thursday’s clash in Calama.

“Pablo has been at home for several days because he is a close contact. I finished quarantine several days ago but I keep testing positive and to enter Chile you need a negative test,” said Scaloni in a video press conference.

Argentina will also be without English-based midfielders Alexis Mac Allister of Brighton and Aston Villa’s Emiliano Buendia after the roommates both tested positive.

“One of those two would have played,” said Scaloni.

Backroom staff Walter Samuel and Roberto Ayala will take charge of the team on Thursday.

Argentina, alongside Brazil, have already qualified for the Qatar World Cup that begins in November, despite having five matches still to play.

Chile, though, are amongst seven teams battling for the remaining two automatic qualification spots.

They have their own Covid problems with three players missing after testing positive: Watford center-back Francisco Sierralta is in quarantine in England while midfielder Mauricio Isla and forward Jean Meneses both tested positive upon arriving in Santiago.

Scaloni left seven-time Ballon d’Or winner Lionel Messi, who recently recovered from Covid, out of his squad for the matches against Chile and Colombia.

Since the beginning of the year, Argentina has seen a new wave of Covid infections, registering more than 100,000 new cases and 300 deaths a day.

The country of 45 million has registered eight million cases and 120,000 deaths in total from Covid.

More than three quarters of the population is fully vaccinated.