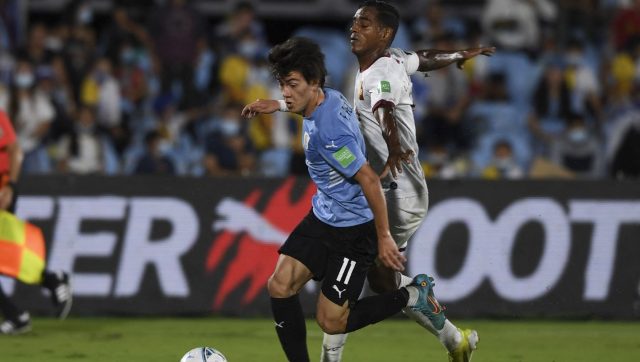 Second-half goals from Kim Jin-su and Kwon Chang-hoon gave the Koreans a comfortable victory over the bottom team in Asia Group A qualifying.

Iran, which has already qualified, beat the UAE 1-0 to remain atop Group A. Iran last week became the first team from Asia to qualify for Qatar when it beat Iraq 1-0.

The top two teams from both groups automatically qualify. The third-place teams advance to playoffs.

In Group B, a first-half goal from Takumi Minamino set Japan on the way to beating Saudi Arabia 2-0 at Saitama Stadium and keeping the host on course for a seventh successive World Cup appearance.

Minamino’s goal from close range after 31 minutes was created by Junya Ito. The Belgian-based winger then added the second soon after the restart with a fierce shot from the edge of the area to seal a first defeat for the Saudis in the group.

Saudi Arabia, which would have qualified for a sixth World Cup with a victory, still leads the group with 19 points, one more than Japan.

Australia allowed a late goal and settled for a 2-2 draw with Oman in Muscat. Australia stays third in Group B though moves onto 15 points.

The Socceroos took an early lead through Jamie Maclaren’s penalty but Abdullah Fawaz equalised for the host soon after the restart. While Aaron Mooy restored Australia’s lead with 13 minutes remaining, Fawaz earned Oman a point with a spot kick after 89 minutes.

Last-placed Vietnam, which had previously lost all of its seven games in Group B, defeated China 3-1 in Hanoi. The defeat ended China’s chances of qualifying for the World Cup for only the second time.