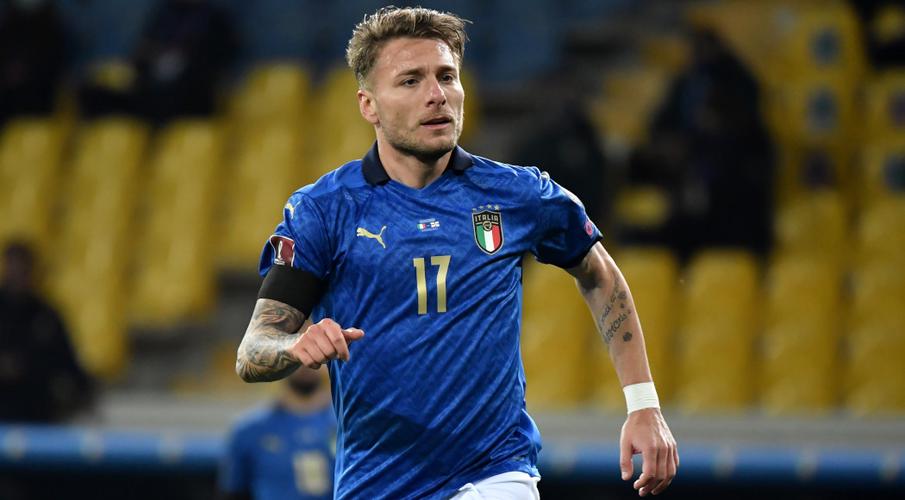 Milan: Ciro Immobile will miss European champions Italy’s key World Cup qualifying clashes with Switzerland and Northern Ireland after being ruled out of the matches with a calf injury on Tuesday.

Italy coach Roberto Mancini had picked Lazio forward Immobile, who leads the Serie A scoring charts with 10 goals in 11 appearances, in the Azzurri squad for their final two Group C matches on Friday and Monday.

However on Tuesday the Italian Football Federation said the 31-year-old would leave the national team camp due to the injury, with Mancini calling up Sassuolo attacker Gianluca Scamacca in his place.

Group leaders Italy take to the field at the Stadio Olimpico in Rome on Friday level on 14 points with the Swiss with two games remaining in the race to the 2022 tournament in Qatar, hoping for a win before taking on Northern Ireland at Windsor Park three days later.

Earlier on Tuesday Immobile hit back at criticism of his form for Italy, which has failed to live up to his goal-getting standards in Serie A.

Immobile has netted 15 times in 54 national team appearances, with his last goal for the Azzurri coming in their 3-0 thumping of Switzerland in June, the second group game of their triumphant Euro 2020 campaign.

“I know the numbers that I’m producing for my club are not the same as those I have with Italy and I won’t deny that the criticism I receive hurts me a bit,” Immobile told reporters.

“It’s upsetting that I don’t get treated like the rest of the players, it’s as though I weren’t one of the 26 at the Euro and that’s not criticism, that’s just spitefulness.”

As well as losing Immobile, Mancini is also sweating on the availability of both captain Giorgio Chiellini and Inter Milan midfielder Nicolo Barella, both of whom did not train on Tuesday.

Injured Roma midfield pair Lorenzo Pellegrini and Nicolo Zaniolo were on Monday replaced by Immobile’s uncapped Lazio teammate Danilo Cataldi and Atalanta’s Matteo Pessina, who has only just returned from over a month on the sidelines.

Pessina, 24, was brought on as a stoppage-time substitute in Atalanta’s 2-1 win at Cagliari on Saturday, his first appearance since a calf injury picked up in a home defeat at the hands of AC Milan in early October.