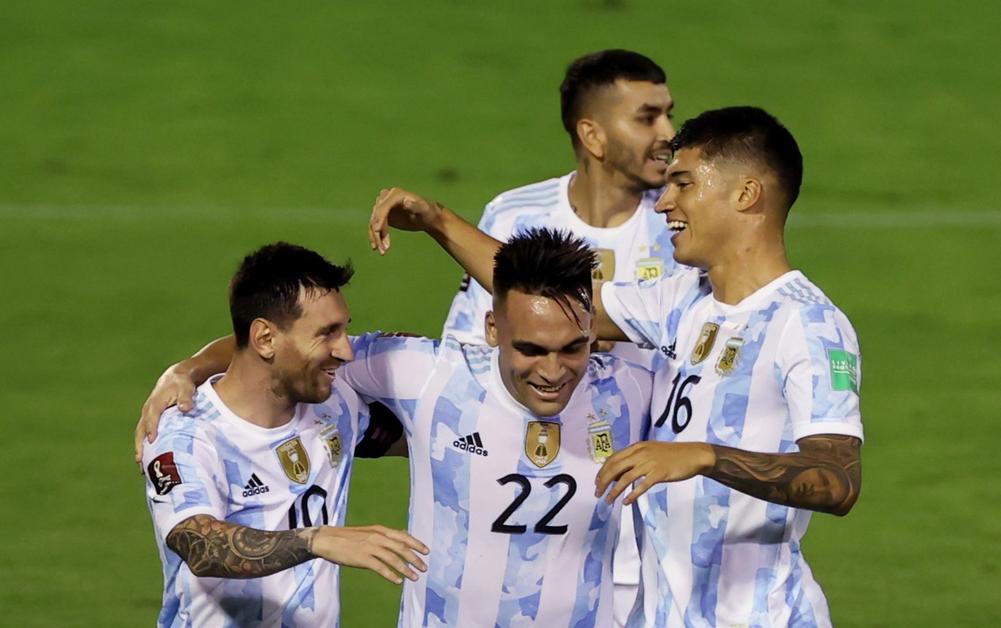 Montevideo, Uruguay: Argentina maintained their unbeaten start to their World Cup qualifying campaign, cruising to a 3-1 victory at 10-man Venezuela on Thursday night.

But Brazil continued their perfect start to qualifying with a seventh win out of seven as Everton Ribeiro scored the only goal in a 1-0 away victory over Chile.

In his first match for his country since moving to Paris Saint-Germain, Lionel Messi struggled to stamp his authority on the match in Caracas, but it mattered little.

Lautaro Martinez opened the scoring in first half injury time after Venezuela had been reduced to 10 men by Luis Adrian Martinez’s red card for a reckless challenge on Messi.

Argentina did not impress but the extra man told in the final quarter when substitutes Joaquin Correa and Angel Correa broke through.

Venezuela did not go home empty handed, though, as Yeferson Soteldo scored a cheeky “Panenka” penalty deep into injury time at the end of the game.

Argentina travel to Brazil on Sunday in a repeat of July’s Copa America final, which they won 1-0 to end a 28-year wait for a major trophy.

“It will be a great, important match after the final we played,” said Lautaro Martinez.

“We have to rest and then approach the match like we did the Copa America final.”

Argentina had been marginally the better side early on, hitting the bar through Rodrigo de Paul’s long range strike on 13 minutes.

But the match turned decisively in the visitors’ favor on the half hour as Luis Adrian Martinez, who was an early substitute and had been on the field for less than five minutes, lunged in rashly on Messi.

The referee brandished a yellow card but following a VAR review that was upgraded to a straight red card for the ugly studs up challenge.

The match turned into attack versus defense and Argentina secured the crucial breakthrough in first half injury time.

As the pressure mounted, Giovani Lo Celso slipped in a perfectly timed pass for Lautaro Martinez to slot into the bottom corner.

Argentina labored after the break against a packed defense but substitute Joaquin Correa finally put the match to bed 20 minutes from time with a fierce low strike from just inside the area after good work from Messi and Lautaro Martinez.

Messi was given a great chance to get his name on the scoresheet five minutes from time but shot too close to Farinez.

Substitute Alejandro Gomez then stood on Soteldo’s foot in the penalty area, allowing the diminutive playmaker to salvage some Venezuelan pride from the spot.

Depleted Brazil were second best for much of their trip to Santiago having seen 11 players prevented from joining the squad by their clubs due to coronavirus quarantine restrictions.

Key English based players Alisson of Liverpool, Chelsea’s Thiago Silva and Manchester City’s Gabriel Jesus were missing but crucially Neymar, who plays for Paris Saint-Germain in France, was available.

And it was his shot on 64 minutes that Chile goalkeeper Claudio Bravo spilled into the path of Everton Ribeiro to nick the only goal of the game.

Ecuador left it late to cement their hold on third place in the standings before beating Paraguay 2-0 in Quito.

Felix Torres opened the scoring two minutes from time with a header and Michael Estrada’s individual effort sealed the victory five minutes into time added on.

Uruguay were without their two star forwards, Luis Suarez, who was injured, and Edinson Cavani, whose club Manchester United refused to release him over coronavirus quarantine regulations in Britain.

But the twice former World Cup winners snatched a draw away to Peru, who climbed off the bottom, as Giorgian de Arrascaeta’s 29th minute equaliser canceled out Renato Tapia’s opener from the hosts five minutes earlier.

Nahitan Nandez almost won it for Uruguay 20 seconds from time but his stunning volley clipped the outside of the post.

Fernando Saucedo equalised seven minutes from time for Bolivia in a 1-1 draw in La Paz after Roger Martinez’s opener for Colombia on 69 minutes following a mazy run.