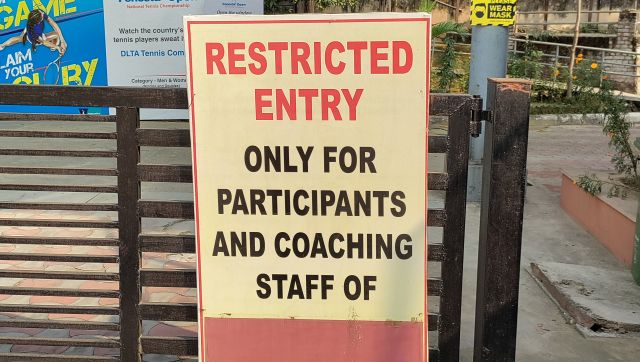 The DLTA Complex in the capital wears a deserted look for the late stages of the Fenesta Open. It is an unusual look for the national tennis tournament, which is used to drawing plenty of aficionados, including the juniors, for the best players in the country. But these are not regular times where hundreds turned up at the 2019 edition. These are pandemic times which meant the 2020 edition was cancelled and this one was held with reduced capacity.

Players are required to wear a mask as soon as they step away from the court. The access is constrained with a “restricted entry” board that only allows players and coaching staff beyond a point. There are no ball kids either with the objective of keeping unvaccinated individuals away. Line judges don’t come in until the quarter-final stage of the tournament, won eventually by Nikki Poonacha and Zeel Desai in men’s and women’s singles categories. The tournament wasn’t held for the junior (U-14, U-16 and U-18) categories.

“The conversations didn’t stop after the 25th edition (2019) and even last year there was regular review of the situation. For us, it was important to have the championship, but it was also important to have the safety of the players, look at the on-ground situation, that was the reason we had to give last year a miss,” said Aman Pannu, the organising secretary.

“And this year, we decided to keep assessing the situation, even two weeks before this (tournament) was to go ahead. So, we decided to keep men’s and women’s only because they’re vaccinated, there’s a comfort level. And it is a national tournament, you will have people coming from all over India. AITA (All India Tennis Association), DLTA (Delhi Lawn Tennis Association) had lots of COVID protocols also and that has given us a lot of comfort. From our end, we were sure that protocols must be followed to the tee. Through the last week, there’s reduced audience but we’ve coupled it with increased social media (activity),” she added.

Tournament referee Supreeth Kadavigere shed further light on the work done behind the scenes to prepare for the nationals. It included an RT-PCR check, despite everyone being fully vaccinated, before the championship began and only then were players allowed to sign in.

Kadavigere revealed there used to be three qualified referees around to conduct the draws, to ensure smooth functioning of the event, which was reduced to one this time. The officials – line judges and chair umpires – would number around 40 which have been cut down this time. A sign at the DLTA Complex during the 2021 Fenesta Open in Delhi. Image: Tanuj Lakhina/Firstpost

“In 2019 things were a lot different than it is today. Usually on the day of the finals, you would have 300-400 people watching, juniors watching, but unfortunately it couldn’t happen. AITA, DLTA and Fenesta as a team have put together this tournament while following the government norms of conducting a sports event during a pandemic. We had a booth set up at the entrance to verify RT-PCR tests and then they were okayed by the referee office for double check,” said Kadavigere.

Pannu agreed there was apprehension as far as hosting the tournament this year was concerned. But she stressed that it only solidified the resolve to have protocols in place and ensure they were adhered to.

DLTA treasurer Aditya Khanna agreed that it was a challenge, but the non-contact nature of the sport helped with the push. “During these circumstances, it is challenging to host a tournament of this structure. Players, staff and everyone have been following the protocols. The world of tennis has started and tennis being a non-contact sport it is still less complicated. We’ve also been conducting international tournaments and they have tough rules. So to replicate it for the Indian tournament hasn’t been difficult,” he said.

The tennis calendar continues unabated with ITF events in Bengaluru, Indore, New Delhi, Gurugram, Solapur, Pune and Navi Mumbai. The smooth conduct of the national tennis tournament will give a boost to the rest.