Explained: Why Italy failed to qualify for FIFA World Cup yet again? 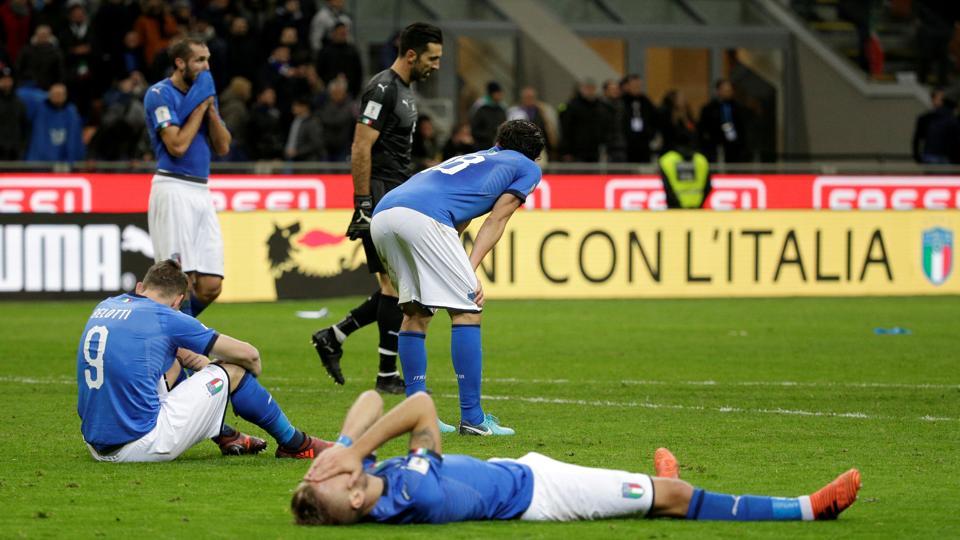 Nine current Italy squad members had faced the hurt of not qualifying for the 2018 World Cup — only the second time the Azzurri missed a spot at the finals. With the play-off against North Macedonia approaching, manager Roberto Mancini didn’t consider the possibility of a third failed qualification.

And he had very little reason to especially after triumphing over England to clinch the European Championships. The quality of football before and during the tournament was sensational, smooth and free-flowing. Italy and Spain scored the most goals (13) at Euro 2020, Italy had the most attempts (128) and were defensively sound with most tackles (99) and balls recovered (291).

But that appeared to be a long time ago as kick-off approached in Palermo. The attacking verve, high pressing and goals galore were missing and were replaced by dreadful goal conversion and lack of ideas in midfield. From being favourites to lift the trophy in Qatar, even reaching the play-offs to qualify had, rightly, drawn pessimism.

Eventually, it looked like one of Italy or Portugal would qualify from the play-offs. Humiliatingly, though, it didn’t come down to the play-off final for the Azzurri. A 92nd minute winner from Aleksandar Trajkovski, who used to play his club football in the Sicilian city, was enough for North Macedonia to progress instead.

The game Italy-Macedonia was played at Palermo’s stadium. Macedonia’s winning goal was by Aleksandar Trajkovski, a former Palermo player. Here’s his goals from the same(ish) spot on the very same stadium over the years#Italy pic.twitter.com/ykPubpeDtd

If the venue and the semantics matter, Palermo was the last venue where Italy played in front of a capacity crowd. And on that occasion, in November 2019, they thrashed Armenia 9-1. But a look at Trajkovski’s goals for Palermo and it appears he was more at home than the Italian national team were!

Question on everyone’s mind was ‘how did Italy not qualify’?

How Italy failed to qualify?

That goalless draw at Windsor Park could well have been a defeat but for a last minute goal-line clearance by Leonardo Bonucci. The stalemate meant Italy had to take the harder route and missed out on automatic qualification.

The Spain defeat, in UEFA Nations League semi-final, meant Italy had lost just once in 41 games before facing North Macedonia. Manager Mancini had set new unbeaten records and gone on lengthy winning streaks. But the goals were drying up as chances continued to go begging.

Asked before the play-off why Italy dropped off after the Euros, Mancini said: “We have always tried to play our football. The only thing is when you prepare the Euros or World Cup, you have time to work in training intensively. When you play mid-season, we don’t have that luxury.”

Why Italy failed to qualify? Italy’s Alessandro Bastoni reacts after his team got eliminated at the end of the World Cup qualifying play-off against North Macedonia. AP

The swagger with which Italy played their football early on under Mancini had become dull. The style had dried up — as had the goals. One of the reasons behind it was the long-term injury to Leonardo Spinazzola.

The win over Belgium in the Euro quarter-final was their 13th in a row going back to the previous November, during which time they had scored 36 times and conceded just twice.

Between then and disaster in Palermo, they drew six times in nine matches with five of their 13 goals coming in one of their two wins, against Lithuania.

Against Bulgaria, Italy had 26 shots. Against North Macedonia they had 32 shots, only five were on target. Previously, Jorginho missed two penalties against Switzerland — errors he thinks ‘will haunt him for the rest of his life.’ “Stepping up there twice and not being able to help your team and your country is something that I will carry with me forever, and it weighs on me. People say we need to lift our heads and carry on, but it’s tough,” he told local broadcaster RAI Sport through tears.

What next for Italy?

In the aftermath, an expected blame game had begun. Italy FA’s President Gabriele Gravina insisted he won’t resign and backed Mancini to continue.

“The result was unfair and the Mancini project will go ahead, same as mine. I must protect the lads and the federation. Surely there have been mistakes, but we must understand if there were short-term or if something needs to be changed radically.” said Gravina.

Bonucci also expressed his support of Mancini. “For us continuing with the coach is just the logical thing to do: his ideas, his human value are unquestionable. The result of a one-off match can change opinions, but those who live this every day only want to continue this path.”

Plenty of finger pointing was aimed at the league for refusing to postpone matches to give the national team players more time to prepare for the play-off.

“The failed qualification to the World Cup is a huge failure for Italian football and everyone should seriously think about it, leading to a radical change of our system,” said league president Lorenzo Casini.

Mancini, meanwhile, said “the disappointment is too great” to make any decisions on his future. Italian media reported Fabio Cannavaro and Carlo Ancelotti as potential successors.

Having had time to discuss things, Mancini confirmed he would be staying. “We need to start again,” Mancini said. “I talked to the president, we’re in agreement on everything… we’ll have time to discuss what we need to improve.”

“I’m still young and I wanted to win a European Championship and a World Cup, we’ll have to wait for the second a little bit. I like this work and I know that with the players we can organise again something important. Apart from the disappointment, everything else is moving forwards,” said the former Manchester City and Inter Milan manager who has a contract until 2026.

What about the team personnel?

Mancini, to a point, is guilty of being too loyal to certain players instead of being meritocratic. Out-of-form Lorenzo Ingisgne and Nicolo Barella are key names in that list.

Starting Giacomo Raspadori or Lorenzo Pellegrini, or calling up Davide Frattesi would have been ideal.

A tearful Giorgio Chiellini, 37, is expected to bid adieu to the Savoy Blue and described himself as “tired and destroyed”. Jorginho was distraught and was allowed to leave the Italy camp after the defeat. As were Insigne, Ciro Immobile, Marco Verratti, Gianluca Mancini and Domenico Berardi.

In hindsight, there are more ‘what ifs’ from the World Cup qualifiers and Italy would have been looking up tickets to Doha. What if Spinazzola had been available? What if Alessandro Florenzi hadn’t erred against Bulgaria? What if Berardi had converted a guilt-edge chance over Switzerland? And again, what if Berardi had been more decisive in front of goal against North Macedonia?