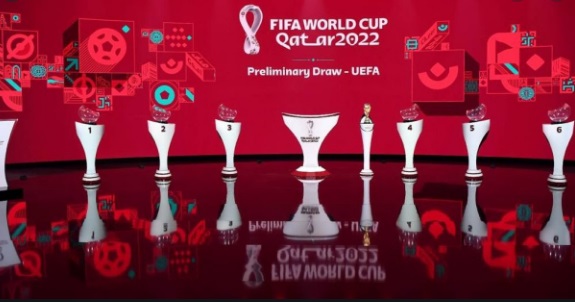 The 55 national football teams in Europe will start World Cup qualifying this week for the 2022 tournament in Qatar even as South America and Asia pause amid the coronavirus pandemic.

The 10 European qualifying groups kick off Wednesday and will play 75 games in eight days. Some teams will play triple-headers in a schedule squeezed by the loss of dates in June because of the postponed European Championship.

No World Cup qualifying game in Europe has been lost to travel and quarantine restrictions. Fears that players based in Germany would be denied travel did not materialize, so Robert Lewandowski can play for Poland in England and David Alaba will join Austria in Scotland.

The pandemic was felt in three teams losing what home advantage exists when most games are still played without fans.

Cristiano Ronaldo will not play for Portugal at home, though he will be on familiar ground in Turin, Italy. Portugal chose the stadium of Juventus as the neutral host for its opening qualifier against Azerbaijan on Wednesday.

2022 World Cup: How qualifying works around the world

Qualifying for the 2022 World Cup began on June 6, 2019, when minor nations from the Asian confederation played their first round of matches. Mongolia’s Norjmoogiin Tsedenbal scored the very first goal in qualifying in a 2-0 win over Brunei Darussalam.

NB: World Cup qualifying has been seriously affected by the coronavirus pandemic with many qualifying paths suspended. The information below may change depending on the viability of the qualifying paths and local situations.

There will be 55 European nations to go through qualifying, who will be split into 10 groups when the draw is held on Monday, Dec. 7, 2020 — with seeding based on FIFA’s November World Ranking.

Qualifying will begin March 2021. There are 10 groups of 5 or 6 teams — with the four teams in the UEFA Nations League finals drawn into a group of 5 so they will have free matchdays for the finals in October 2021. There will be qualifying treble headers in March and September to make up for the lost World Cup qualifying dates from June 2021 (the new date for Euro 2020).

Group winners will go directly to the finals.

The final three places with being allocated via playoffs. This will involve the 10 runners-up plus the two best-ranked group winners in the 2020-21 UEFA Nations League not to have qualified.

There will be three routes, each with four teams with a semifinal and a final for a place at the World Cup, playoffs to be held in March 2022.

The first four rounds of qualifiers in March and September 2020 were suspended and it finally began in October 2020.

However, the two planned rounds of matches in March 2021 had to be postponed due to issues with European players being able to travel to Brazil amid the pandemic.

There will already be an international break in January 2022 to help complete qualifying in full in the existing format. But the loss of another two rounds puts that in jeopardy. There is at present no news on how the games will fit into the calendar.

CONCACAF has 35 FIFA-affiliated nations, most of them very minor in world football.

A revamped qualification process was confirmed for the 2022 edition, which was due to begin in September 2020 and run to September 2021. However, this has now been abandoned due to the coronavirus pandemic.

The format had to be reworked again, as follows:

Round One: Nations ranked 6-35 in the FIFA World Ranking were drawn into six groups of five. Each team will play every other team in their group only once, with the round now scheduled to be played in March and June 2021. The six group winners will progress.

Round Two: The six group winners will play home and away in a direct elimination format, in June 2021. The three winners will progress.

Final Round: The three winners join the teams ranked 1-5 in FIFA’s World Ranking (Costa Rica, Honduras, Jamaica, Mexico, United States). The eight teams will play each other home and away, a total of 14 matches. The top three qualify directly, with the fourth-placed team going to the intercontinental playoff in June 2022.

Round One: The 28 lowest-ranked nations play two-legged ties. The ties were played in September 2019, with the full fixture list available here.
Round Two: The 14 winners from the first round we’re joined by the other 26 African nations. Those 40 teams were split into 10 groups of four teams, with the group winners advancing to the final round.

This round was due to begin in March 2020 and run through to October 2021 until football was suspended. The preliminary World Cup competition will now be played in four windows in 2021, with two games each. The group stage starts from May 31-June 15 and continues in the FIFA windows on Aug. 30-Sept. 7 and Oct. 4-12.

Round Three: The 10 group winners will be drawn into head-to-head, two-legged ties for one of the five places at the World Cup. Fixtures to be played in November 2021.

The first two rounds of qualifying are exactly the same as four years ago.

Round One: The 12 lowest-ranked nations played two-legged ties in June 2019. Guam, Macau, Mongolia, Timor-Leste, Bangladesh, and Cambodia advanced.
Round Two: The six winners from the first round join the other 34 Asian nations, drawn into eight groups of five teams — also played as qualifiers for the 2023 Asian Cup finals (for this reason World Cup hosts Qatar will take part).

Qualifying is still suspended due to the pandemic, with no games played since November 2019.

In an attempt to get all games completed, the AFC decided to hold all matches on a centralized basis. The host nations are shown in bold. The round will now be completed between May 31 and June 15, 2021.

Round Three (final group round): The remaining 12 nations will be drawn into two groups of six teams. Group winners and runners-up qualified for the World Cup. To be played from September 2021 to March 2022.
Round Four: The teams finishing third in round three played a two-legged playoff, to be played May or June 2022. The winners then advanced to an inter-confederation playoff, to be played in June 2022.

Round One: Teams split into two groups based upon FIFA World Ranking playing round-robin games. The top two nations in each group progress. At present, there is no date through January 2022 that has been suggested.
Round Two: The four teams play home and away semifinals and final for the right to go through to the intercontinental playoff (June 2022).

This will feature one team each from Asia, CONCACAF, Oceania, and South America. A draw will determine the two-legged ties. They will be played in June 2022 — pushed back from the originally scheduled date in March 2022.

The 10 group winners will qualify directly for the final tournament in Qatar.

The 10 runners-up will advance to the playoffs next March, joined by two teams from the Nations League.