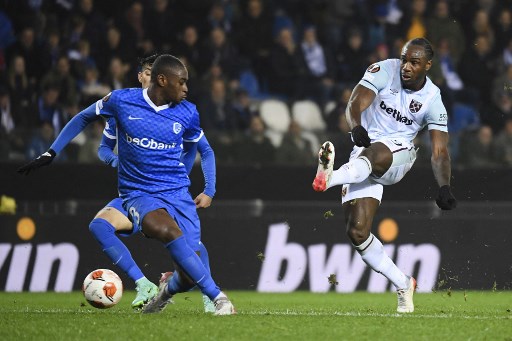 West Ham qualified for the Europa League knockout stages despite Tomas Soucek’s own goal costing them victory in a 2-2 draw at Genk on Thursday, but Leicester City have work to do after being held 1-1 at home by Spartak Moscow. Celtic gave their chances of reaching the last 32 a boost by beating Ferencvaros 3-2 in Hungary, while Rangers also have it all to play for in the final two games after coming from behind to draw 1-1 away to Brondby. West Ham are on the brink of guaranteeing top spot in Group H which will book their place in the last 16, but needed Said Benrahma to score twice in Belgium to preserve their unbeaten record in Europe.

In the 1,000th game of his managerial career, David Moyes took the opportunity to rest a number of his key players ahead of Liverpool’s visit to the London Stadium on Sunday and paid the price with a slow start as Joseph Paintsil opened the scoring for Genk after just four minutes.

The introduction of Soucek, Pablo Fornals and Jarrod Bowen after the break helped turn the game around.

Benrahma rounded off a brilliant team move to equalise before using his individual skill to wriggle free of the Genk defence and fire powerfully in at the near post.

However, the visitors dropped points for the first time in the group when Soucek’s diving header flew into his own net three minutes from time.

“It’s a moment I’ll really remember because the game will always be remembered for Tomas Soucek’s own goal!” Moyes said on his personal landmark.

“But overall I am thrilled to reach a thousand games. It is a great achievement.”

Vardy’s spot-kick was saved by Aleksandr Selikhov with 15 minutes remaining.

Serie A leaders Napoli now top the group after thrashing Legia Warsaw 4-1 to move onto seven points with the Poles on six and Leicester on five.

“We never had the killer instinct in the box to take the opportunities.”

Celtic closed to within a point of Real Betis in Group G thanks to goals from Kyogo Furuhashi, Jota and Liel Abada in Budapest.

Betis were thrashed 4-0 by Leverkusen with Moussa Diaby scoring twice for the Germans.

Leverkusen need just one point from their remaining two games to guarantee top spot and a place in the last 16.

Lyon are already into the last 16 as a 3-0 win over Sparta Prague won Group A.

Sparta and Rangers are level on four points, but the Czechs have the advantage on head-to-head record ahead of the meeting between the sides at Ibrox on November 25.

Ianis Hagi came off the bench to salvage a point for the Scottish champions in Copenhagen after they fell behind to Leon Balogun’s own goal.

Eintracht Frankfurt are the third side already through after a 3-1 win at Olympiakos.

A four-goal thriller that ended 2-2 between Marseille and Lazio left Group E as it was at the start of the evening as Galatasaray were held 1-1 by Lokomotiv Moscow.

The Turkish giants lead the section on eight points, three clear of Lazio with Marseille one further back.

Monaco maintain a two-point lead over La Liga leaders Real Sociedad after both games in Group B ended in draws.