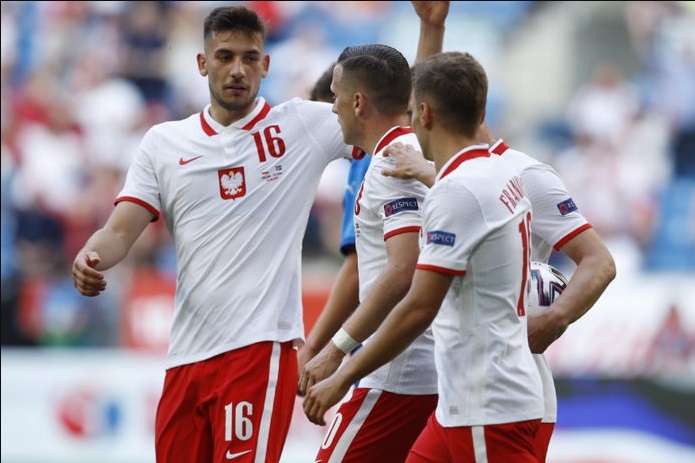 Euro 2020 POLAND vs SLOVAKIA LIVE – Poland eyeing a perfect start: Poland is set to host Slovakia in the Group E opener at the Gazprom Arena on Monday. The match will kick-off at 9.30 PM IST. Indian people can watch the live broadcast on SonyLIV.

🇵🇱🆚🇸🇰 Slovakia lead Poland at the break in St Petersburg…

Predict what will happen in the second half 👇#EURO2020

40′ Can Poland find an equalizer before the end of 1st half?

34′ Krychowiak hammers a thunderous shot, and it goes just above the goalkeeper.

30′ Slovakia continue to cause problems, mainly through Mak and Duda on the wings. Hamsik picks up the ball on the corner of the box and forces Klich into a block

9.53PM Back to back yellow cards

18′ Robert Mak! The winger picks up the ball on the left, turns away from Jozwiak before nutmegging Beresynski and bursting into the box. He shapes up his shot before finding the inside of the near post with a fierce drive.

🇸🇰 Slovakia have won 3 of their last 4 matches against Poland…#EURO2020 pic.twitter.com/s3cM1mbk9K

9.34 PM: Lewandowski with an early attempt

4′ Lewandowski lines one up from range but sees his shot blocked by his own player, before the striker links up nicely with Zielinski. The Napoli man seems to be Poland’s most advanced midfielder early on.

1′ The ball is set rolling and immediately focus is on Lewandowski. He is the star of the show here.

With a number of stars in action, who will steal the show tonight?

Euro 2020 POL vs SLO LIVE –Robert Lewandowski’s side hasn’t had a smooth transition since the ouster of their former manager Jerzy Brzeczek it hasn’t been smooth sailing for them.

New manager Paulo Sousa who only took charge at the start of this year hasn’t managed to get the best out of the squad but will get down to business once they start their Euro 2020 journey.

Euro 2020, POL vs SLO LIVE: Slovakia eye topple Poland- Slovakia is coming to the Euro 2020 having gone unbeaten in their last 5 matches. Marek Hamsik’s side had to toil hard for the qualification as they had to come through the playoffs having finished third in their group in the UEFA Nations League. However, it seems time is on their side and with an inconsistent Poland side on the opposite they just need to go with the flow.

The Sony Sports Network are the official broadcasters of the UEFA Euro 2020 in India. The telecast of the same will be available on SONY TEN 2 and SONY TEN 3 (in Hindi) channels from June 11, 2021, to July 12, 2021. The live stream of the games will also be available on the Sony LIV app.

What Time Euro 2020 ENG vs CRO LIVE Will begin? Time

What are the venues for Euro 2020? – Venue
EURO 2020 – The host cities: The host cities for the Euro 2020 are London, Seville, Glasgow, Copenhagen, Budapest, Amsterdam, Bucharest, Rome, Munich, Baku and Saint Petersburg