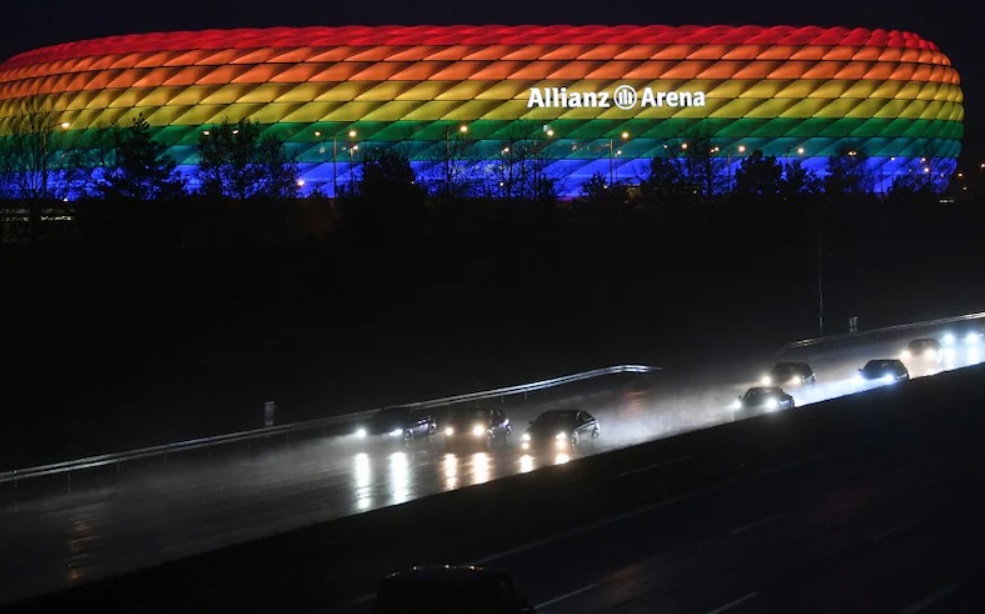 UEFA’s decision to block plans by Munich to light the Allianz Arena in rainbow colours for the Germany-Hungary Euro 2020 match was met on Tuesday with defiance in the Bavarian city which vowed to decorate other landmarks in protest at a law passed by the Hungarian government. “UEFA is a politically and religiously neutral organisation,” said European football’s governing body in a statement ahead of Wednesday’s match. “Given the political context of this request — a message aimed at a decision taken by the Hungarian national parliament — UEFA must refuse.”

“I find it shameful that UEFA forbids us to send a sign for cosmopolitanism, tolerance, respect and solidarity with the people of the LGBTIQ community,” he said.

He plans to put up rainbow-coloured flags at the Munich town hall and illuminate a huge wind turbine located close to the stadium, as well as the city’s 291m-tall Olympic Tower.

Reiter had wanted the Allianz Arena — owned by Bayern Munich, but rented to UEFA for Euro 2020 — in rainbow colours for the crucial Group F match to “send a visible sign of solidarity” with Hungary’s LGBTIQ community.

In a statement Tuesday, Bayern president Herbert Hainer said the Bundesliga giants would have been happy if their stadium had “shone in the rainbow colours”.

Hungary’s right-wing government last week passed a law banning the “promotion” of homosexuality to minors, outlawing any educational programmes or material in which homosexuality is mentioned.

“We find it very disconcerting how UEFA deals with values that should generally be accepted in society,” Markus Ulrich, a spokesman for Germany’s Lesbian and Gay Association (LSVD), told AFP subsidiary SID.

“UEFA has not recognised the signs of the times — and it is clear to see which side it is taking with its decision.”

Even former England captain Gary Lineker was in favour of seeing the Allianz Arena in rainbow colours.

“Do it, Munich. Do it. Light it up for the world to see. Ah, just do it anyway,” Lineker wrote on Twitter.

While the Allianz Arena will not be lit in rainbow colours on Wednesday, other football stadiums in Germany will.

Berlin’s iconic Olympic Stadium, as well as Bundesliga stadiums in Cologne, Frankfurt and Wolfsburg all plan to be colourfully lit.

“Cologne stands for diversity and tolerance. The developments in Hungary are frightening — it is all the more important to set an example against this,” a spokesman told AFP.

“The leadership of UEFA made the right decision by not assisting in a political provocation against Hungary,” Szijjarto said Tuesday in a statement sent to AFP.

“It is no longer a mere statement in the common fight against any form of discrimination, but a political action,” said German FA interim president Rainer Koch, who also sits on UEFA’s Executive Committee.

While the request for the day of the match was rejected, UEFA has suggested alternative dates for June 28, which is Christopher Street Liberation Day, an annual celebration and demonstration held in various cities across Europe, or from July 3-9, the week of pride marches in Munich.

UEFA had previously opted not to take disciplinary action against Germany skipper Manuel Neuer for wearing a rainbow-coloured captain’s armband.

Tensions are running high on and off the pitch.

Hungary need a win to reach the last 16, while hosts Germany know just a draw would secure a spot in the knockout phase.

An investigation into an allegedly homophobic banner and monkey noises at Hungary’s first two Euro matches in Budapest was opened by UEFA on Sunday.