Euro 2020: Marco Reus makes himself unavailable for Germany to focus on recovery 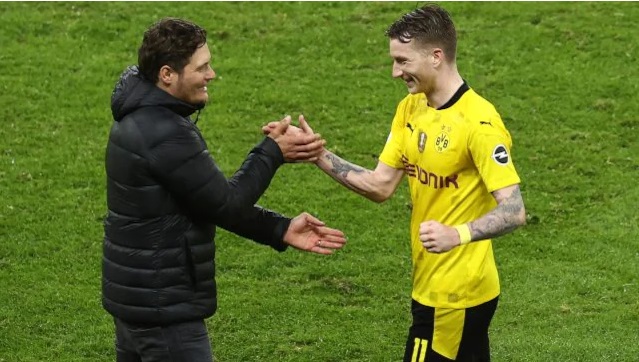 Borussia Dortmund captain Marco Reus has made himself unavailable for the Euro 2020 finals with the Germany squad to be announced on Wednesday.

The 31-year-old says he needs the summer to recover after a taxing season and will sit out the European Championship from 11 June until 11 July.

After Barcelona goalkeeper Marc-Andre ter Stegen pulled out with injury on Monday, Reus is the second high-profile German to drop out before Joachim Loew names his Germany squad.

After a complicated, energy-sapping and in the end – thank God – successful season, I have decided together with the national coach (Loew) not to go to the European Championship,” Reus wrote on his Instagram account on Tuesday evening.

The attacking midfielder has been in stellar form in recent weeks as Dortmund won their last six Bundesliga games, to qualify for the Champions League, and the German Cup final.

Injuries meant Reus missed both the 2014 World Cup finals, which Germany won, and the Euro 2016 campaign.

He has scored 13 goals for Germany in 44 games since his debut in October 2011 in an injury-ravaged career.

Reus last played for Germany in October 2019 and says the decision to make himself unavailable was “very difficult. I’m always full of pride when I play for my country.

“But after a very intense year for me personally and achieving my goals at BVB (Dortmund), I have come to the decision to give my body time to recover,” he added.

With Reus out, Germany still has a wealth of options upfront with Chelsea’s Kai Havertz, plus the Bayern Munich trio of Leroy Sane, Serge Gnabry and Thomas Mueller, all in form.

On Wednesday, Loew is expected to name both Mueller and defender Mats Hummels, ending the exile of the pair who he told in 2019 they were no longer part of his plans.

Loew, 61, will step down after 15 years as head coach after the European Championship, where Germany face world champions France, holders Portugal and Hungary in their group.

Belgian players to get COVID-19 vaccine before Euro 2020
Premier League: Liverpool Close In On Champions League Thanks To “Semi-Final” Win At Burnley