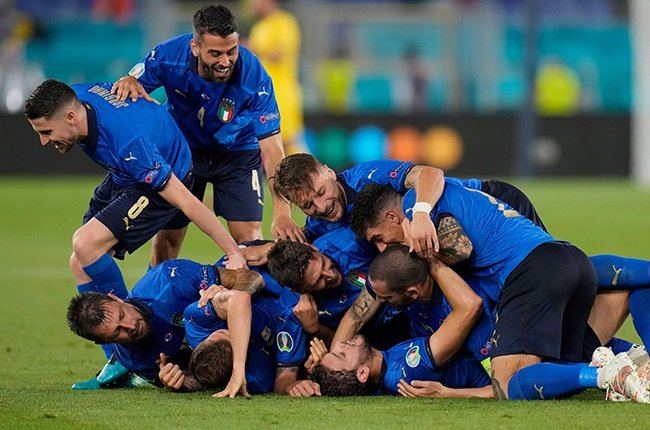 Italy’s Leonardo Bonucci says the Azzurri are “thriving on the occasion” as they prepare to face Spain at Wembley on Tuesday in a blockbuster first semi-final of Euro 2020, a tournament in which they have so far been the standout side. “We are thriving on this occasion, we have made it this far and we are going to give absolutely everything in our power to make the Italian people proud of this Azzurri side,” the Juventus defensive stalwart said on the eve of the game. Bonucci added that Italy planned to dedicate reaching the final to their stricken team-mate Leonardo Spinazzola, who suffered a ruptured achilles tendon in the 2-1 quarter-final win over Belgium in Munich on Friday.

That result saw Roberto Mancini’s team stretch their remarkable unbeaten run to 32 matches after they previously saw off Turkey, Switzerland and Wales in Rome in the group stage before edging Austria 2-1 after extra time at Wembley in the last 16.

That has inevitably led to a surge in confidence back home and Italy are now widely considered the favourites against Spain.

“We have had a flawless run so far, but even if Spain have had some issues we need to put that to one side and really focus on what we need to do, where we need to improve,” said the 34-year-old central defender.

“We simply need to be motivated by the fact we are coming up against such a great and prestigious side in such a wonderful arena as Wembley, in the knowledge that we could be involved in the final in just a few days’ time.”

More than 60,000 fans will be allowed to attend the game inside the 90,000-capacity stadium after the British government eased the coronavirus restrictions that have been in place during the tournament.

However, the crowd will be almost entirely British due to restrictions on fans of the two sides entering the United Kingdom.

“That said we are better off playing in front of any crowd as opposed to a small number of people, but I do think it’s unfair we don’t have half the stadium full of Italian fans and the other half full of Spaniards.”

It is the fourth consecutive European Championship in which these sides have met, with Spain winning on penalties in the Euro 2008 quarter-finals and then claiming a stunning 4-0 win in the final in Kiev in 2012.

Italy gained a measure of revenge last time out, winning 2-0 in the last 16 of Euro 2016 in France with Giorgio Chiellini and Graziano Pelle scoring.

“The final in Kiev leaves a bitter taste in the mouth because we were really all out of puff by the time we got to the game,” recalled Bonucci, who played for Italy against Spain in 2012 and in 2016.

“We were short of ideas and short of energy and the result was a fair one on the day, but 2016 was a completely different occasion.”

Mancini said he expected Italy to be at full strength with both striker Andrea Belotti and defender Rafael Toloi hoping to shake off knocks in time.