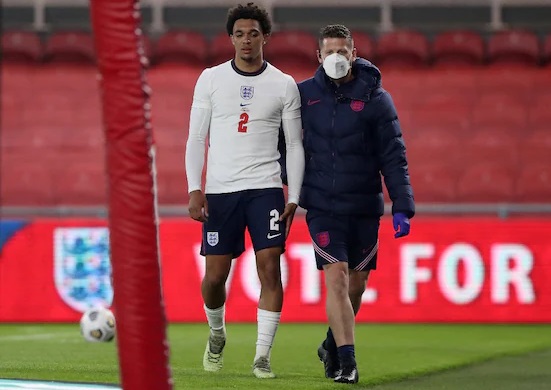 England defender Trent Alexander-Arnold will miss Euro 2020 with a thigh injury suffered in Wednesday’s friendly against Austria. Alexander-Arnold limped off in the closing stages of England’s 1-0 win after sustaining the injury while clearing the ball. The Liverpool right-back looked emotional as he was helped around the pitch and England manager Gareth Southgate admitted after the game that it was “not a good sign”. Alexander-Arnold had a scan on the problem on Thursday and the 22-year-old is expected to be sidelined for six weeks, which will rule him out of the European Championship.

“Trent Alexander-Arnold has been ruled out of UEFA Euro 2020,” a Football Association statement said.

“The Liverpool player sustained a thigh injury in the closing stages of Wednesday’s 1-0 win against Austria in Middlesbrough.

“A scan on Thursday confirmed the 22-year-old will be unable to play in the forthcoming tournament so has withdrawn from the England squad to return to his club for rehabilitation.

“Gareth Southgate will not confirm a replacement until after Sunday’s return to the Riverside Stadium for the warm-up fixture against Romania.”

England play their first group match against Croatia at Wembley on June 13, before hosting Scotland and the Czech Republic in their other games.

Alexander-Arnold’s withdrawal completes a whirlwind period for the defender, who had to endure reports he would not make Southgate’s 26-man squad before learning of his inclusion on Tuesday.

Southgate has plenty of cover for Alexander-Arnold, who finished the season in fine form for Liverpool after an erratic period earlier in the campaign.

Manchester City’s Kyle Walker, Chelsea’s Reece James and Atletico Madrid’s Kieran Trippier were the three other right-backs picked by Southgate for the tournament.

He could replace Alexander-Arnold with another defender in Brighton’s White or Everton Godfrey, who both made their England debuts as substitutes against Austria.

If Southgate wants to call up a more attacking option, he will choose from Manchester United’s Lingard, Aston Villa’s Watkins or Southampton’s Ward-Prowse.

Maguire is unlikely to be fit for the Croatia game as he recovers from ankle ligament damage, while Henderson hasn’t played since February after groin surgery.

Grealish, just back from a shin injury, needed an ice pack on his leg after being subjected to a series of rough tackles in the Austria clash.