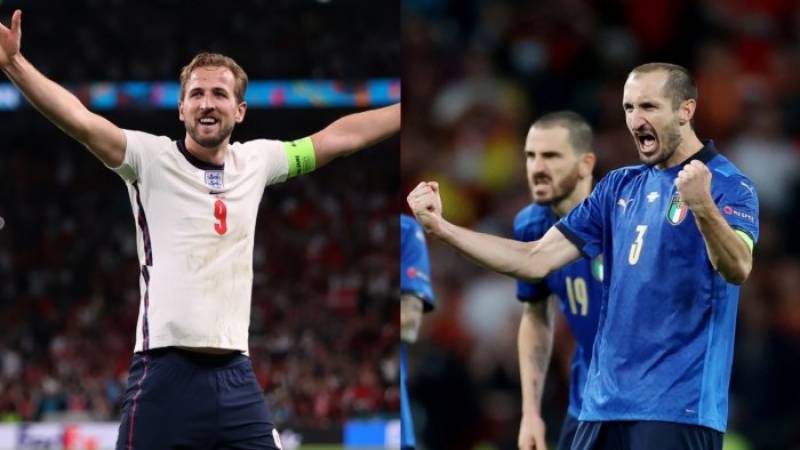 England and Italy are counting down to Sunday’s Euro 2020 final, with Gareth Southgate’s men seeking to end a 55-year trophy drought while the Italians aim to spoil the Wembley party. Sporting immortality beckons for England captain Harry Kane and his team-mates, who are desperate to etch their names into the record books by winning just the second major trophy in the nation’s history. Wembley, which was also the venue for England’s 1966 World Cup triumph, will host around 65,000 fans for the game despite coronavirus restrictions still in place.

England began the tournament as one of several contenders to lift the trophy and have taken advantage of playing all but one of their matches at home.

Southgate’s men will be willed on by the vast majority of a crowd that created a crackling atmosphere for England’s last 16 win over Germany and the semi-final success against Denmark.

“We’ve all waited so long as players, as public, as people to see us in a final,” said Kane. “So these are the opportunities you have to grab with both hands.”

Kane, who said the squad had received a message of support from Hollywood actor Tom Cruise, added: “We have an amazing chance to win our second major trophy as a country.

“The players we’ve had over the years and produced, we feel proud to be representing them as well.”

Southgate has a potential headache after revealing that Manchester City midfielder Phil Foden, who has featured in three Euro 2020 matches so far, is a doubt for the final due to a foot injury.

Standing in England’s way are a battle-hardened Italy side who have restored the nation’s pride after failing to qualify for the 2018 World Cup.

England have never beaten Italy at a major tournament, although meetings between the nations have been few and far between.

Italy triumphed in a penalty shoot-out in the Euro 2012 quarter-finals and won 2-1 when they met in the group stage of the 2014 World Cup, though both sides ended up being eliminated in the first round.

The teams have been transformed since that low point.

Italy lit up Euro 2020 from the moment they beat Turkey 3-0 in the tournament’s opening game a month ago.

The Azzurri are on a national record 33-match unbeaten run under coach Roberto Mancini, who has spent time in England both as a player and as a manager.

This will be their third game of the tournament at Wembley, where they beat Austria 2-1 in extra time in the last 16 and Spain on penalties in a gripping semi-final on Tuesday.

“Playing at their home does not scare us,” Italy’s veteran defender Leonardo Bonucci said.

“We are looking forward to taking to the field even though most of the fans present will be English. We want to do something historic, have a great performance and then we’ll see how it ends.”

Italy had the backing of around 11,000 British-based fans at the semi-final and their supporters will once again be there for the final.

Reports in Italy said that 6,500 tickets had been sold to fans based in Britain and that number would be bolstered by 1,000 more who will fly into the country for the game, including President Sergio Mattarella.

Italy are looking to end a long wait to win the European Championship.

The four-time World Cup winners have been continental champions only once, when it was just a four-team event in 1968.

Since then they have reached two finals, losing to France in 2000 and to Spain in 2012. Sunday’s game will be their 10th major tournament final.

Away from the build-up to the final, European football’s governing body UEFA has fined the English Football Association 30,000 euros ($35,500) after a laser pointer was shone at Denmark goalkeeper Kasper Schmeichel on Wednesday.

And Hungary branded UEFA a “pathetic and cowardly body” after the country’s football federation was sanctioned for the “discriminatory behaviour” of the team’s fans during Euro 2020.

UEFA ordered Hungary to play their next three games behind closed doors and fined the federation 100,000 euros.