Euro 2020: Dzyuba to lead from front for Russia at European Championship 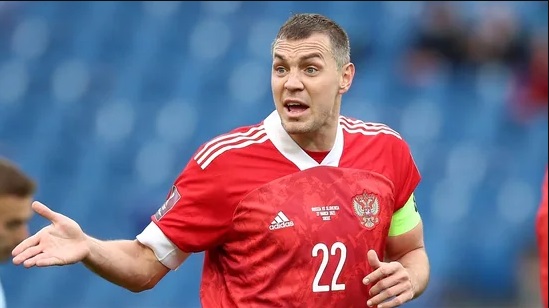 Dzyuba, 32, will captain the side, with Cherchesov naming only two other forwards in Anton Zabolotny and Alexander Sobolev.Striker Artyom Dzyuba will lead the line for Russia at the European Championship, supported by the pace and trickery of winger Denis Cheryshev, after head coach Stanislav Cherchesov revealed his final 26-man squad for the tournament on Wednesday.

Dzyuba, 32, will captain the side, with Cherchesov naming only two other forwards in Anton Zabolotny and Alexander Sobolev.

The team will be without talismanic goalkeeper Igor Akinfeev, who refused to end his international retirement for the Euros, with Dynamo keeper Anton Shunin stepping up to number one instead.

Russia are in Group B with Belgium, the world’s top-ranked team, Denmark and surprise qualifiers Finland.

Cherchesov whittled down his squad from 30 players, with defenders Roman Yevgenyev and Ilya Samoshnikov, goalkeeper Andrei Lunev and midfielder Arsen Zakharyan missing out.

Monacao’s Alexander Golovin made the cut in midfield, alongside the Zenit St Petersburg trio of Daler Kuzyayev, Andrei Mostovoi, Magomed Ozdoyev, while two more Zenit players, Yury Zhirkov and Vyacheslav Karavayev, have been named in defence.

Russia begin their Euro campaign against Belgium on June 12.

Qatar a ‘quality team’, it will be difficult game against them: Stimac
La Liga: Barcelona bring back Emerson Royal from Real Betis