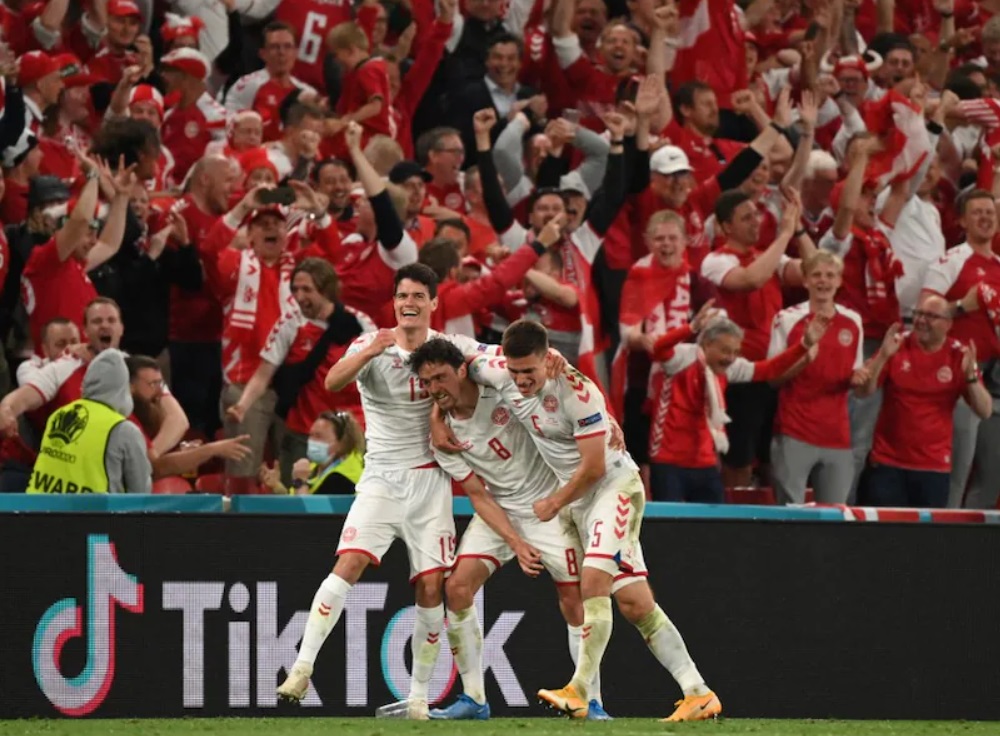 Denmark made it through to the last 16 of Euro 2020 on Monday after a convincing 4-1 win over Russia which alongside Belgium’s victory against Finland meant they finished second in Group B. Goals from Mikkel Damsgaard, Yussuf Poulsen, Andreas Christensen and Joakim Maehle gave the Danes their fist win of the tournament on a joyous evening at the Parken Stadium in Copenhagen. Delirious fans showered each other with beer as Denmark rattled in the goals that allowed them to end the group stage in party mood after the trauma of Christian Eriksen’s mid-match collapse in their opening fixture against the Finns.

Denmark will face Wales in the last 16 in Amsterdam on Saturday.

The Danes came into the match with no points from their first two matches but knowing a win over Russia by two goals or more and defeat for Finland would guarantee them passage from the group as the second-placed team.

During the match’s opening ceremony a huge Denmark shirt with “Eriksen 10” written on it was unfurled to deafening cheers from supporters, after which a rousing rendition of “You’ll Never Walk Alone” was belted out from the stands.

The sense that this was a pure sporting occasion after the troubles of recent days was highlighted by the chorus of boos which greeted the Russian team onto the pitch.

Once the match got underway, Denmark continued with the same aggression as in their defeats to Finland and Belgium but initially struggled to create chances against a solid Russia team who were content to keep things tight.

The nominal home team, Russia enraged the Danish fans by taking their time over set-pieces and throw-ins as early as midway through the first half.

However it was the Russians who had the first chance of the game, Aleksandr Golovin driving towards the goal and fashioning a great scoring opportunity only to shoot straight at Kasper Schmeichel from close range.

They were left to rue missing that chance six minutes before the break when Damsgaard showed why he was picked to replace Eriksen as Denmark’s playmaker.

The Sampdoria winger, who only turns 21 early next month, looked like he had all the time in the world when he unleashed a curling strike that whipped passed Matvei Safonov and caused an eruption of celebrations in the stands.

Their tails up and the crowd now bouncing in unison, Jannik Vestergaard came close to making it two in as many minutes when he headed a corner just wide.Denmark continued to press after the restart but their second came in almost comical circumstances on the hour mark.

Poulsen could hardly believe his luck when Daler Kuzyaev’s miscued back-pass rolled straight to him in front of the Russian goal, leaving him the simple task of rolling into an empty net and giving Denmark the two-goal lead they needed to finish second should Belgium win.

Soon after the already rowdy fans in the Parken let out possibly the loudest cheer of the night as news of Romelu Lukaku’s opener against Finland filtered through, but they were soon dampened by that goal being ruled out and Russia being awarded a penalty which was slotted home by Artem Dzyuba.

They were on their feet again with 15 minutes remaining thanks to Lukas Hradecky’s own goal which put Belgium a goal ahead and Denmark in second place.

Denmark were now charging forward and Safonov had to pull of three incredible saves in quick succession before Christensen rammed home a superb long-range strike in the 79th minute.

As the fans, who had made a tremendous racket all game, began their celebrations for making the knockout stage, Denmark ended the group stage in style when Maehle slotted home the fourth three minutes later to complete a perfect evening.

The players and coaching staff then all huddled together in the centre circle before breaking out into wild celebrations amid fantastic cheers from the stands.